Have I Got A Fish Story To Tell You...

Is anyone biting on Joe's line concerning what he said about Barack Obama during the campaign?

Anyone figure that, as time goes by, Joe's lies will get even bigger? The fish story that will be Joe Lieberman's future campaign: 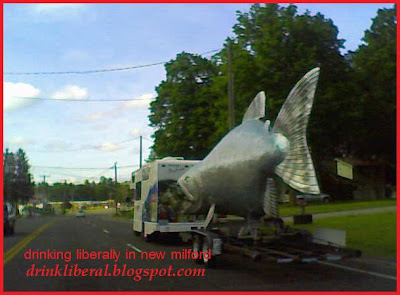 Holy Cow! I agree with Gingrich...

Candace Gingrich, that is:

Candace Gingrich criticized her half-brother Newt for “being a hater” and for using “LGBT Americans as political weapons to further your ambitions.” Addressing Newt directly on The Huffington Post, Candace — a lesbian herself and an LGBT rights activist — writes:

The truth is that you’re living in a world that no longer exists. I, along with millions of Americans, clearly see the world the way it as — and we embrace what it can be. You, on the other hand, seem incapable of looking for new ideas or moving beyond what worked in the past. […]

This is a movement of the people that you most fear. It’s a movement of progress — and your words on FOX News only show how truly desperate you are to maintain control of a world that is changing before your very eyes.

Newt Gingrich can take his hate somewhere else... Whether we are talking about the hate against Afircan Americans and other minorities, or hating people that just want the right Marriage Equality.

And if we have to force some of you fringe thinkers to accept that these equal rights are guaranteed under the Constitution... That is an argument we are ready to have any day, any time, anywhere.

Your personal, moral and religious beliefs are not more important than mine. Get over your idiotic selves.