Image of a word bomb

If a picture is worth a thousand words than this one speaks volumes about where a pretty darn liberal America is right now: 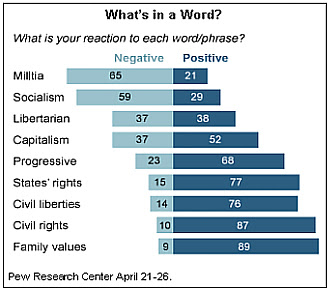 Though I embrace many of the progressive ideas that those who have embraced the name "progressive" espouse, I have always preferred to stick to the name liberal. For the most part liberal is progressive and progressive is liberal. Somebody can correct me if I am wrong on this but about the only difference between them is those that embrace the name progressive tend to be more closely associated with the Democratic party and those that have stuck with liberal tend to be more independent of a political party affiliation. Not always, but for the most part.

I can not see tossing out the word liberal simply because a synonym has shown some level of popularity across the board in American's eyes. The fact is that it is the ideas that count regardless of what you want to call it.

Besides that? DLinNM sounds pretty safe and if I take on the popular word and change my Blog's name to Drinking Progressively in New Milford shortening it in comments, etc., would sound too much like an adult sex classified ad:  "DPinNM"