As recently as this morning, McCain again told reporters that he planned on returning to the Senate for this evening’s vote on the economic stimulus, stating that Congress needed to quickly pass legislation.

The measure, blocked by conservatives, fell just one vote short of the 60 needed to end debate. At the “last minute,” McCain decided to skip the vote, even though his plane landed in DC in time. McCain claimed that he was “too busy“:

“I haven’t had a chance to talk about it at all, have not had the opportunity to, even,” McCain said. “We’ve just been too busy, focused on other stuff. I don’t know if I’m doing that. We’ve got a couple of meetings scheduled.”

Both Sens. Barack Obama (D-IL) and Hillary Clinton (D-NY) were able to return to the Senate and vote on the bill.

The reason for breaking this promise and allowing his GOP to filibuster the stimulus package? McCain was afraid to offend the craziest and most wingnutty wackos in his party:

Voting “no” with Republican leaders would have offended millions of Social Security recipients and the disabled veterans not scheduled to receive rebates. Voting “yes,” on the other hand, risked alienating Bush, GOP leaders and conservatives already suspicious of McCain’s political leanings. McCain was speaking Thursday before a meeting of the Conservative Political Action Conference, a group that booed him last year in absentia.

If he can't stand up to the Republican terrorists in his own GOP's base, you can be certain that even the mention of the words "al Qaeda" will make him wet his pants. Those words seem to have that effect on a lot of conservatives these days, so no surprise about that one... Never mind that he turned his back on the elderly and disabled veterans because he is a scared little old man.
Brewed by Connecticut Man1 at 2/07/2008 08:31:00 AM 2 comments:

Via BradBlog, (and h/t Buzzflash) anyone can have their very own Diebold voting machine master key now: 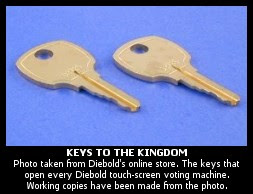 Good lord in heaven. How dumb are these guys at Diebold?! Can you believe the United States has actually entrusted them to build a security system for the original U.S. Constitution, the Declaration of Independence and the Bill of Rights?!

After everything else... now comes this.

It was revealed in the course of last summer's landmark virus hack of a Diebold touch-screen voting system at Princeton University that, incredibly, the company uses the same key to open every machine. It's also an easy key to buy at any office supply store since it's used for filing cabinets and hotel mini-bars! That is, if you're not a poll worker who already has one from the last time you worked on an election (anybody listening down there in San Diego?).

This idiotic company has had a photograph of the stupid key sitting on their own website's online store! (Screenshot [up ^^^ there])

Of course, they'll only sell such keys to "Diebold account holders" apparently --- or so they claim --- but that's hardly a problem.

C'mon Connecticut! Do you still trust your vote to these Diebold morons?

[update] While on the topic of voting issues, Real Hartford is trying to figure out if this is irregular:

If there is anyone else from Hartford who voted for Kucinich, please comment or contact me privately. The Courant is reporting only ONE person in all of Hartford voted for him, and while that could be the case, I sort of doubt it. There are towns of only about 10,000 people recorded as having 7 or 8 people vote for him, so I’m a little suspicious about the single voter in Hartford stat.

What do the Soldiers think about Bush's failed war?

Well? What do they really think?

Yesterday, the Center for Responsive Politics reported that members of the military donated the most not to McCain, but to two anti-war candidates:

Individuals in the Army, Navy and Air Force made those branches of the armed services among the top contributors in the 4th Quarter, ranking No. 13, No. 18 and No. 21, respectively. In 2007, Republican Ron Paul, who opposes U.S. involvement in Iraq and Afghanistan, was the top recipient of money from donors in the military, collecting at least $212,000 from them. Barack Obama, another war opponent, was second with about $94,000.

These donations reflect the military’s disapproval with the Iraq war and President Bush’s handling of it. A recent Military Times poll found that just 46 percent of U.S. troops now believe that the country should have invaded Iraq, and only 40 percent approve of Bush’s handling of the war.

Money talks and bushit walks... And it is important to note that CGG's ActBlue (I am sure she has taken over the place now! lol jk) is becoming a real force to be reckoned with:

The biggest "contributor" of all after one year of fundraising remains the progressive group ActBlue, which facilitates individual donors pooling their money to finance Democratic candidates. In donations exceeding $200, ActBlue has directed more than $2.2 million to the presidential candidates, but nearly all of it went to dropouts John Edwards and Bill Richardson. ActBlue's fundraising is far greater than campaign finance reports would suggest, however, since donations below $200 are not itemized on candidates' reports and, therefore, cannot be tracked or totaled.

That money may not have pushed those candidates on to the top of the ticket, but it did help push Edwards and Richardson's pro-sanity positions on war, poverty and other issues to the forefront of the presidential debate. Sometimes winning is as simple as effecting the agenda of a primary or election. Never mind the large amounts ActBlue sends other candidates into what would normally be underfunded primary and election races.

As one investigation led to another, it appears that more Republican sex may have taken place in Alaska. And, as is often the case, this typically GOPish sex scandal includes minors:

Allen pleaded guilty in May to bribing Alaska lawmakers. Once the chairman and an owner of the oil field services company Veco, he was forced to sell the company and now faces a lengthy prison term. That's a stunning fall for a power broker who handed oil-policy decrees to a stable of bribed legislators and who regularly socialized with senators and other national political figures who came to Alaska as guests of Sen. Ted Stevens.

At the time the Boehm investigation was developing, from 2003 to 2004, Allen was still a major player in Alaska politics, as he had been for decades, and was a reliable source of campaign money for state candidates, members of Alaska's congressional delegation and other national politicians. In 2000 he was Alaska co-chairman of President Bush's election campaign.

In an interview in October, Vandegriff wouldn't name Allen's alleged victim or victims. He said Allen was not a direct subject of the Boehm investigation. But he said there was one person involved in both the Boehm case and the investigation of Allen: Bambi Tyree, one of Boehm's co-defendants.

Vince Blomfield, Tyree's boyfriend starting around 1999 when he was 36 and she was 18, said in an interview with a private investigator working for Boehm that Tyree claimed to have had a sexual relationship with Allen when she was 14 or 15. Allen would have been in his late 50s at the time. The interview with Blomfield was cited in a court filing by Boehm's attorneys, who were trying to portray Tyree as having a history of preying on older men with money.

It has become clear that in the modern dictionary "Republican" and "GOP" have become synonymous with "Pedophile". And before anyone starts with the "Both sides do this!" crap:

This summer’s political conventions are expected to be “a boom in business” for “the sex and adult entertainment industries,” but according to one veteran sex worker who spoke to the Rocky Mountain News, the GOP conventions are “a lot better for the sex workers.” “We get a lot more business,” Carol Leigh told the paper. “I don’t know if they’re just frustrated because of the family values agenda.”

Obviously, the party with all of those family values hypocrites do it a lot more, whether it involves minors or not.
Brewed by Connecticut Man1 at 2/05/2008 08:16:00 AM No comments: