In his own special way:


Sharp-eyed Ben was reading my story when he noticed something I had missed:

Lieberman managed to misspell the name of Anthony Weiner (D-N.Y.), who, I swear, has uttered the phrase "As long as you spell my name right" in my presence.

Wrote Lieberman: "I fear the people who are advocating the Medicare buy-in are doing so not because they think it will give more help to these Americans than the subsidies and exchanges, but because they see it as a big step toward a single payer system as Congressman Anthony Wiener [sic] and others have explicitly said."

Ben quickly contacted Weiner, who has become one of the most outspoken progressives on health reform.

Quipped Weiner: "Maybe he couldn't spell 'flip-flop' or 'back-stab,' either."


Zing.... More recently? Weiner had this to say about Harold Ford trying to get into the NY Senate race:


"I don't think we need another Joe Lieberman"

After waiting 6 months for Franken to join the Senate?

Months and months of obstruction that the Democratic party had to sit through waiting for Norm Coleman to give up what he had lost in the elections, a reality of election law that the Dem party had to deal with in Minnesota and in the Senate waiting for a 60th vote. And Scotty Brown is out there making up conspiracy theories about the elections before they have even happened?

State Sen. Scott Brown (R-MA), the Republican candidate running for the special election in Massachusetts next week, has been campaigning for the last several days telling crowds an odd conspiracy theory. Brown is alleging that state officials, including the Secretary of State’s office, are devising a plot to deny Brown’s election certification, if he wins, until after health reform passes:


BROWN: The latest development is Senator Kirk, the interim senator which we manipulated senate the succession issue to make sure that we had that 60th vote to kind of ram things through, well he announced today that he’s not resigning and that the Secretary of State thinks he needs to wait until every single ballot is counted and recounted and triply counted, and they’re not going to certify me until after the healthcare debate. Now, you know what that does, that makes me sick to my stomach. [...] We called on her [Martha Coakley] to stand up to the manipulation of another vote in Washington. We’ve called on her tonight to stand up and say ‘no, no, whoever wins, you certify them right away.’


ThinkProgress contacted the Massachusetts Secretary of State office for comment on Brown’s theory that officials are conspiring to refuse to seat him immediately after the election on January 19th. Brian McNiff, a spokesman for the Secretary of State, called Brown’s remarks “nuts.” He then explained that by law, election officials must wait 10 days after the election for military and overseas ballots. Also, by law, an additional five days (totaling 15 after the election) are required for cities and towns to verify and report ballots. Responding to a question about Brown’s conspiracy theory, Rep. Barney Frank (D-MA) said, “That is the stupidest thing I’ve been asked in a long time. That is insane, the suggestion could only come from a demented right wing source.”


And now that the shoe is on the other foot?


"Now that the same rules could handicap Republicans, well, my goodness, it's an assault on liberty!"


"We are in a fundraising drive so that we can buy as many TV ads supporting Brown as possible," they wrote to supporters.


"We must take action, for if we can pull out a victory, we stop the Democrats dead in their tracks in their effort to secretly ram through their socialistic healthcare plan," they wrote. "That's because Scott Brown wholeheartedly opposes the Democrat's government-run healthcare plan and has made his opposition to it a central part of his campaign."


No matter what happens in that election, the Democratic party already passed something in the Senate, as craptastic as it is, and if there is even a hint that the obviously addle-brained Brown won't join the rest of the Senate to pass anything the House adds to that?


The House will surely pass the Senate's junk if Brown wins. And there is absolutely nothing Scott Brown can do about it. Ever. And that is the naked truth.


Talk about trying to scare teabagrrrs into opening their wallets for a guaranteed nothing. And nevermind the fact that Brown voted for the same kind of "socialist" reform in Massachusettswhen that came up in his state. Flip-Flop much?

Just like the Christianists, GOP operatives are trying to use the teabagers as an ATM machine for Brown's own political purposes with a blatant disregard to the tea party activists' own stated interests, as crazy as most moderates and the left find some of the teabagers' ideas are.


OOPS! Brown is lying to everyone - Left, Right and Center. And hoping nobody notices until after the elections.

Everything new can and will be passed long before that election is certified. Even if they change some of the stuff in their "conference-not-a-conference". Election is the 19th? It takes a minimum of 15 days after that for the elections to be certified in Mass.. That means certification is into February... That is the law. And assuming no lengthy legal battles like Al Franken had. That means the Senate can vote on the fixes and have the new bill back to the House before either Brown or Coakly ever sees the inside of the Senate.
Brewed by Connecticut Man1 at 1/14/2010 01:12:00 PM 1 comment:

Some things are worth crowing about:

Via Tengrain at Mock, Paper, Scissors:


Our own Cassie is now a published author!

Read Cassie’s article in Mother Jones, and be sure to leave a comment for her there.


Go Cassie! And the article is worth the read... 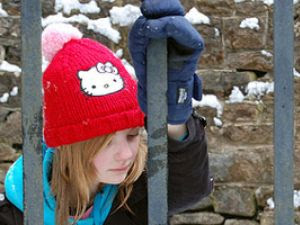 We love seeing bad parents getting punished. Why don't we care how that affects their kids—like me?

A short note to Harold Ford, who is brutally trying to flip-flop his way into New York's Senate race:

For those of you confused about the lack of motivation from activists in supporting Obama's and Congress' healthcare reform, healthcare activists take to the streets in California demanding REAL Healthcare Reform.

Too bad the people in charge in Washington, D.C., aren't truly interested in really motivating people like that to vote for them... The little things that can be the difference between winning and losing elections. You can read more on that rally here:

The future of healthcare reform came to Sacramento yesterday

Tea Party Credo: "If you can't reform your image, Photoshop it!"

Last week I posted on one of the Tea Party leaders and a "Man of Faith", Dale Robertson, who has some serious messaging issues to deal with, as you can see here: 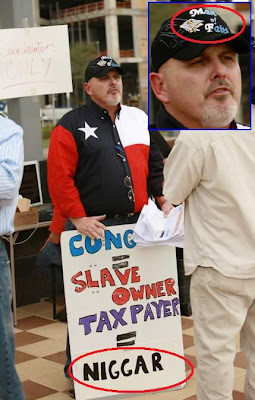 It appears that Robertson has decided to reform his image in the only way he knows how:


When you're a Tea Party activist and you've been caught holding a racist sign that refers to taxpayers as the "n" word, maybe it's better to just leave the whole subject alone.


Dale Robertson seems to disagree. Over the weekend, the Houston-based Tea Party leader posted the photo of himself at a rally last year that you can see [here]. 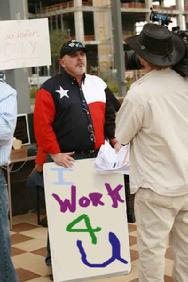 Notice something strange about the words on that sign Robertson is holding? That's because it's a (very poorly) photoshopped image. In the real photo, Robertson's sign bears a very different message.


If only all idiotic comments were so easily (air)brushed aside? The GOP could just make a photo like this one: 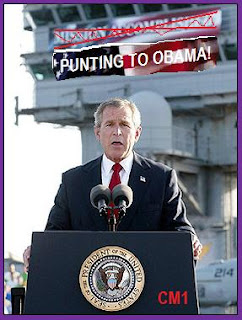 
And declare the Bush years a rousing success...