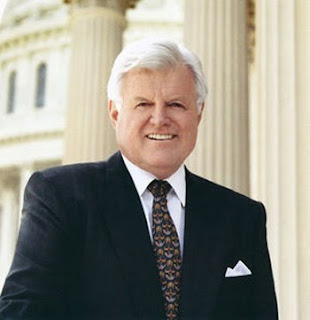 
Kennedy, who waged a public fight against a malignant brain tumor in the last year of his life, was surrounded by family members who had come in recent days to say a last goodbye to him. His death marks the end to a life where like the phoenix. Kennedy rose above earlier lapses in judgment that nearly eclipsed his potential.

Kennedy was first elected to the U.S. Senate from Massachusetts in 1962 and was re-elected for seven full terms.

He became the third-longest-serving senator of all time.


a mishearing of the original song's chorus of 'uyimbube' (meaning "you're a lion"). Pete Seeger had made some of his own additions to the melody. The song was credited exclusively to Paul Campbell, a fictitious entity used by Harry Richmond to copyright material in the public domain.

Pete Seeger explains in one recording, "it refers to an old legend down there, [about] their last king [of the Zulus], who was known as Shaka The Lion. Legend says, Shaka The Lion didn't die when Europeans took over our country; he simply went to sleep, and he'll wake up some day."

ctblogger had the story up early at HatCityBLOG and MLN, and the Newstimes got around to covering it as well, on Bethel's First Selectman, Bob Burke, being arrested for making harassing phone calls.


Ellis said Burke and the alleged victim had a personal relationship that was private between them and their families, but the issue became public after the individual went to the police department several times.