We can sit here and discuss healthcare reform as we wait for reform, but there are so many reasons why so many people need access to Doctors and hospitals to kick in NOW. From Mobilization For Healthcare For All, here is one of those reasons: 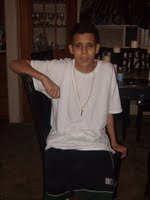 While heath care reform dominates the national debate, not everyone in this wealthy country will be helped. In Kansas City, KS, there is a 14 year-old boy named Eduardo Loredo who could die any day.

Eduardo is being denied a heart transplant because he does not have health insurance (or enough money) to pay for a heart transplant and follow up care. Eduardo was diagnosed with Cardiomyopathy, and was hospitalized at Children's Mercy Hospital in Kansas City, MO beginning in July 2009. Eduardo was sent home from Children's Mercy Hospital on October 14, 2009 and told that he had the potential to live a few years or a few days.


Missouri's Medicaid program is generally available only to citizens and certain legal immigrants who meet a five year waiting period. These restrictive rules prevent Eduardo from qualifying for health insurance that would cover both the transplant procedure and the long-term follow up care required to ensure a successful transplant. Without this coverage, the total cost of the transplant would cost his family $500,000. Children's Mercy Hospital told Eduardo that without an up-front payment of $100,000, he would not even be able to get on the waiting list for a heart transplant. While Children's Hospital in St. Louis, MO originally offered to perform the transplant surgery for no cost, this offer was later retracted. His family is simply being told that his life is not a priority.

Help the Mobilization keep fighting for the right to health care. Since this campaign started, we've been able to support brave activists across the country stand up to the biggest corporations in the world, and say, "We demand the right to health care." Now we are taking the message to Congress that Medicare for All is the only way to end the needless suffering and death in the wealthiest country in the world. We are planning actions on Human Rights Day, December 10th, across the country at Senators offices. Please join those efforts.

But we need your support to keep this campaign going, click here to donate now. Give what you can and we will make sure that every Member of Congress hears about Eduardo's needless suffering and demand the right to health care for all people in this country.

Martin Luther King, Jr declared: "Of all the forms of inequality, injustice in health care is the most shocking and inhumane."

Thank you for your support.

For health and justice,


Some of Mobilization for Healthcare for All's upcoming events:

Washington, DC
When: 10:00am
Where: Sidewalk in front of Hart Senate Office Building – On Constitution Ave. (between First and Second Sts. NE)
Contact:
Andy Richards, (571)-438-3393, arichards365[at]hotmail.com
What: Health Care is a Human Right National Day of Action Rally

"The American right wing has gone off the rails, into the bushes,
and off the cliff. I won’t be going over the cliff with them."

Why I Parted Ways With The Right


There are 7 more reasons, among the listed ones, for why you might have to call him a liberal/communist/socialist/etc. Blogger now. And, obviously, he is not the brightest bulb in the Blogosphere if it took him this long to figure it out, but among the right wing? About as close to a luminary as they had. And holy frick! He slams the door in every other right wing pundit's and Blogger's face as he leaves. I am just getting some disinfectant ready before I peek at the comment threads over there. ;)

I hope they don't mind the new communist logo I made for them. Just wondering if I should have changed it to a Russian football? (A soccer ball)

Will Teabagger anti-immigration agnst spill over to the Schiff campaign?

Peter Schiff is well known for his for far right wing way out there libertarian Ron Paul-like views. You have to wonder if some of Teabagrrrrr angst will spill over to the GOP primary battles and burn Peter Schiff here in Connecticut?


I used to support Ron Paul, until I had this falling out with these Ron Paul fanatics. They’re not all that way, just too many. The ones that I’ve met, who are very hateful people, have no business supporting Ron Paul. Jeff Schwilk and William Gheen have no business being in political activism because, in my blatant personal opinion, they are outright racists.


Gilchrist has long attempted to distinguish his “multi-ethnic” border vigilante group from more overtly racist organizations such as Gheen’s Americans for Legal Immigration PAC (ALIPAC). However, their public feud is more the product of personal infighting than ideological differences.


It is somewhat ironic to see the noted bigot, Jim Gilchrist, calling other people crazy racists. Tells you just how far out there in wingnuttia some of these angry people are.

And the motto of the few remaining members of the GOP that will have to sit through their brand of crazy in the GOP primaries?

Load up on guns
Bring your friends
It's fun to lose and to pretend
She's overborne and self-assured
Oh no, I know a dirty word