The jolly gent, Santa Clause, has already hit Australia, New Guinea, Indonesia and parts of China. You can follow him all day long and late into the night at the Norad tracking site, which is updated every five minutes! Just be sure the kids are in bed before he hits your town.

To speak to a NORAD Santa Tracker in person:

If you have Google Earth you can follow him there in 3D: 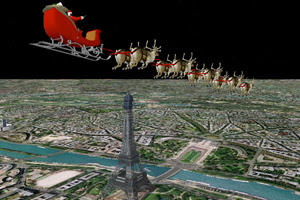 Merry Christmas and Happy Holidays to everyone!

There Is A Storm Brewing In NOLA

Some of you may not have noticed, as you do your last minute Christmas shopping, but there is a class war going on in this country... And the powers that be don't give a fuck if they have to use violence to stifle the voices of those that are willing to stand up against their brutal economic rape of the downtrodden in New Orleans.

There was a tornado warning on Thursday, December 20th, with a cool front marching down south. The tornado that touched down though, was the incredible spirit, will and determination of those fighting for public, and affordable housing in this city, and taking on the NOPD and New Orleans City Council in the process.

We were prepared, Thursday, to challenge what we already knew would go down: the vote in the affirmative by the New Orleans City Council to demolish over 4000 units of critical, public and affordable housing in New Orleans. Our intent was to keep the meeting from happening, to prevent the vote, by peaceful, but loud, raucous protest. There was no intent to commit violence. Many of us were quite willing to be arrested. One of the principles decided on by public housing residents in this struggle is that it will be a non-violent struggle.

There were not now, nor have there ever been, plans to commit violence by any of our people. However, when people are physically attacked by police, sometimes you fight back. You can call it instinct, survival, or foolhardy, call it what you will, but human nature being what it is, sometimes people fight back. The first punch was thrown by the NOPD however, which you can observe by watching the above video.

I was one of those locked out that day. I brought my camera, fully intending to document even though locked out. We were behind and to the side of council chambers, locked out by virtue of a pair of handcuffs on the gate that encloses a covered driveway behind the chambers.

Police lined that covered driveway, and we knew there were significant numbers in the chambers. We received phone reports that our colleagues had prevented the meeting from beginning, by chanting and shouting and demanding that those locked out be allowed in.

Suddenly, from the outside, we saw at least 10 police officers rush into the building. We knew it was going down inside. We all began to scream and some of us shook the gate violently. We wanted in to help defend our sisters and brothers.

Duranta has a lot more on this. While Common Dreams has this up from Naomi Klein:

The Shock Doctrine in Action in New Orleans
by Naomi Klein

Readers of The Shock Doctrine know that one of the most shameless examples of disaster capitalism has been the attempt to exploit the disastrous flooding of New Orleans to close down that city’s public housing projects, some of the only affordable units in the city. Most of the buildings sustained minimal flood damage, but they happen to occupy valuable land that make for perfect condo developments and hotels.

The final showdown over New Orleans public housing is playing out in dramatic fashion right now. The conflict is a classic example of the “triple shock” formula at the core of the doctrine.

Democracy Now! has been covering this fight all week, with amazing reports from filmmakers Jacquie Soohen and Rick Rowley (Rick was arrested in the crackdown). Watch residents react to the bulldozing of their homes here.

And footage from yesterday’s police crackdown and Tasering of protestors inside and outside city hall here.

This is just one particular piece of this whole program. Public hospitals are also being shut down and set to be demolished and destroyed in New Orleans. And they’ve systematically dismantled the public education system and beginning demolition on many of the schools in New Orleans–that’s on the agenda right now–and trying to totally turn that system over to a charter and a voucher system, to privatize and just really go forward with a major experiment, which was initially laid out by the Heritage Foundation and other neoconservative think tanks shortly after the storm. So this is just really the fulfillment of this program.

Akuno is referring to the Heritage Foundation’s infamous post-Katrina meeting with the Republican Study Group in which participants laid out their plans to turn New Orleans into a Petri dish for every policy they can’t ram through without a disaster. Read the minutes on my website.