It appears that Ronnie Raygun's words have come back to haunt the traitors that hero worship him:

Remarks on Signing the Intelligence Identities Protection Act of 1982

Excerpt from the speech delivered by Ronald Reagan:


Whether you work in Langley or a faraway nation, whether your tasks are in operations or analysis sections, it is upon your intellect and integrity, your wit and intuition that the fate of freedom rests for millions of your countrymen and for many millions more all around the globe.…

Like those who are part of any silent service, your sacrifices are sometimes unappreciated; your work is sometimes misunderstood. Because you’re professionals, you understand and accept this. But because you’re human and because you deal daily in the dangers that confront this nation, you must sometimes question whether some of your countrymen appreciate the value of your accomplishments, the sacrifices you make, the dangers you confront, the importance of the warnings that you issue.

And that’s why I have come here today; first, to sign an important piece of legislation that bears directly on your work, an act of Congress whose overwhelming passage by the representatives of the American people is a symbol of their support for the job that you do every day. But even more than this, I’ve come here today to say to you what the vast majority of Americans would say if they had this opportunity to stand here before you. We’re grateful to you. We thank you. We’re proud of you.

If you support the treachery of rove and libby than I hold nothing but contempt for you. The potential dangers that these leakers have exposed networks of agents to, and the security risks they have caused for our nation is nothing less than an act of treason.

Yep! Treason...
Reagan is calling y'all on it from his grave there bushies.

The Congress has carefully drafted this bill so that it focuses only on those who would transgress the bounds of decency; not those who would exercise their legitimate right of dissent. This carefully drawn act recognizes that the revelation of the names of secret agents adds nothing to legitimate public debate over intelligence policy. It is also a signal to the world that while we in this democratic nation remain tolerant and flexible, we also retain our good sense and our resolve to protect our own security and that of the brave men and women who serve us in difficult and dangerous intelligence assignments.

During the debate over this bill, some have suggested that our focus should be not on protecting our own intelligence agencies, but on the real or imagined abuses of the past. Well, I'm glad that counsel was rejected, for the days of such abuses are behind us. The Congress now shares the responsibility of guarding against any transgression, and I have named a new Intelligence Oversight Board and Foreign Intelligence Advisory Board to assist me in ensuring that the rule of law is maintained in areas which must remain secret and out of the normal realm of public scrutiny.

Beyond this, I have full confidence that you'll do your job vigorously and imaginatively while making sure that your activity is lawful, constitutional, and in keeping with the traditions of our way of life. And while you're at your job and while I'm President and while these Congressmen stand at watch, we'll work together to see to it that this powerful tool of government is used to advance, not abuse, the rights of free people. 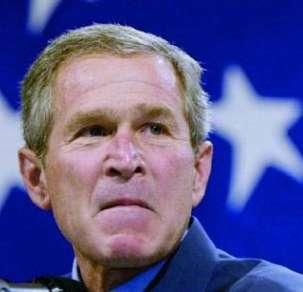 Why is that mean man scowling? Maybe he just saw the latest post over at Escahaton by Atrios... Looks like turdblossom has willted in America's eyes, and while Atrios got the scoop, well, all bush has left is a heaping pile of poop:

Monday, July 18, 2005 Many Doubt White House CooperationWith Federal Investigation of CIA LeakJust a quarter of Americans think the White House is fully cooperating in the federal investigation of the leak of a CIA operative's identity, a number that's declined sharply since the investigation began. And three-quarters say that if presidential adviser Karl Rove was responsible for leaking classified information, it should cost him his job.

Careful what you step in as you follow the treason of rove Atrios... You don't want to come out of it smelling like the Benedict Arnold administration in the White House right now... (If your cats are anything like my dog... There is always the chance of finding a bush turd on the living room floor the hard way! lol)

Young Republicans Following in the Footsteps of the Crooks in Power

Crooks and Liars has a great story on republicans passing the torch of crime on to their youth:

I kid you not. YR's should have accepted the ad I tried to place. They could have used the extra cash, even if it came from a Frenchman.

Nevada's chapter of the Young Republicans has basically imploded, leaving its chairman with up to $25,000 in personal debt and allegations that he mishandled money. All but three people have resigned from the statewide group, but the fallout could prove increasingly embarrassing to the entire state Republican Party. Today, the chairman of the group, Reno resident Nathan Taylor, plans to hold a press conference attacking three of the state's party leaders -- Sen. John Ensign, Rep. Jim Gibbons and Rep. Jon Porter.

'I've got bills at the hotel I can't pay,' said Taylor, a 29-year-old political science senior at UNR who said he had to quit his food service job and drop classes to plan the convention....read on

Nathan's just doing a job worthy of the CBO. Taylor will probably double his efforts with extra bake sales and some double secret super duper rants. If he enlists, I'm sure he will be able to pay of the bills he ran up with all the extra incentives the Army is offering now. What say you Nathan? Your country needs you.

Also in trouble is a Steve Damion New Jersey College Republicans. Looks like he's out of a job too. "

These criminal republicans are just cut from the same cloth as their national leaders. I agree that they should enlist in the military, if not to support the stupid policies they have so screwed up the nation with so much, than at least to teach tham a little bit about responsibilities and good citizenship.