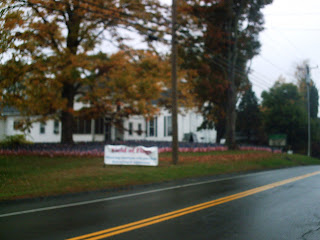 I thought that some of you may be interested in the fact that the Gaylordsville United Methodist Church in New Milford is currently displaying the Field of Flags. (Sorry for the lousy pics, but it is raining and not the greatest cam) 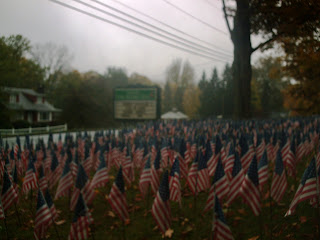 A message from the Connecticut church that started this memorial:

Members of the Memorial Garden Committee of the Somers Congregational Church placed 2,231 American flags on the west lawn, one for each American casualty in Iraq and Afghanistan. This “Field of Flags” was dedicated Sunday, October 23, 2005 with an outdoor service including the reading of the name and rank of each American casualty. This list, which was displayed on a sign in front of the Field of Flags was updated almost daily. Over 120 flags were added representing the continual loss of life since October 23rd. A notebook was available in the main lobby of the church building with the name, rank, town, state and date of death of each casualty.

The flags were placed to honor those who have given their lives in the conflicts and to show that those who have died and their families and friends were remembered in prayer at the Church. The idea for the field of flags came about as members of the Memorial Garden Committee considered what our church could do to show support for the troops. Each casualty reminded us of the danger, and increased the empathy we felt for the families of those who have died.

The Field of Flags had more impact than the committee envisioned with the media coverage and the emotional reaction from our community and beyond. People have come from towns across the state and out of state to see the flags and view the name board. Individuals and families have found the display to be quite emotional and comforting to know that their loves ones have been remembered. The Field of Flags remained in place until November 27. The Field of Flags is now at the Providence Presbyterian Church in Virginia Beach, Virginia. (ed. note: It is in New Milford now-CM1) We will pass the flags on to other churches that are willing to display them, keep the list updated, and add flags as necessary. We envision that church passing the display on to another church and so on, similar to a prayer chain.

If anyone knows of a church that may be interested in having the Field of Flags, they should call the church office (860) 763-4021. Additional information in setting up a Field of Flags may be found on our church website (www.somersnow.com/somerscong) under Field of Flags.

The Field of Flags was a silent, patriotic and poignant reminder of the cost of war. Each flag represented not simply one casualty, but all the family members and friends who have been touched by that life now gone. They represented our respect for those who have served and are currently serving in the military and our hope for peace in the future; for a time when no one is called upon by our country to give the greatest sacrifice. We ask that you keep all of these families in your prayers.

They may have started this memorial with 2,231 flags but, sadly, it has grown much larger since then... 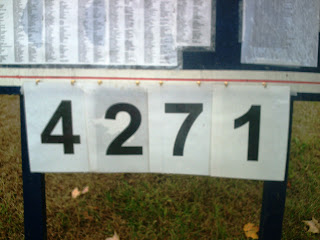 For anyone that would like to visit this memorial, it is located in Gaylordsville just north of New Milford on the 7. It should be on display until November 9th. And be sure to sign the guest book located in the mailbox next to the list of dead soldiers.
Brewed by Connecticut Man1 at 10/19/2007 02:16:00 PM 1 comment:

Earlier today TPM Election Central reported that Senator Dodd plans on putting a hold on the bill that would grant immunity to some of those ANTI-Constitutionalists that illegally spied on you:

Senator Chris Dodd plans to put a hold on the Senate FISA renewal bill because it reportedly grants retroactive immunity to telephone companies for any role they played in the Bush administration's warrantless eavesdropping program, Election Central has learned.

Dodd will send a letter to Senate Majority Leader Harry Reid this afternoon informing him of his decision. Dodd also plans to put up a page today at his campaign Web site where opponents of the immunity provision can register their opposition.

“Later today Senator Dodd will be sending a letter to Majority Leader Reid informing him that he plans to put a ‘hold’ on a bill that would provide for retroactive amnesty for telecom giants that were complicit in the Bush Administration’s assault on the United States Constitution," Dodd spokesman Hari Sevugan told Election Central. "Senator Dodd said that he would do what he could do to stop this bill, and with this announcement he has again shown that he delivers results.”

I have decided to place a "hold" on the latest FISA bill that would have included amnesty for telecommunications companies that enabled the President's assault on the Constitution by illegally providing personal information on their customers without judicial authorization.

I said that I would do everything I could to stop this bill from passing, and I have.

Please note that there is no longer such a thing as a "Conservative Constitutionalist," especially in the modern day GOP. The real Constitutionalists are lefty Bloggers and activisits, as well as some Democratic politicians like Senator Dodd.
Brewed by Connecticut Man1 at 10/18/2007 03:52:00 PM No comments:


It is bad enough that around half the voters in the '04 presidential elections were crazy enough to vote for the idiot that had already cemented the legacy of "WORST PRESIDENT EVER IN THE HISTORY OF THIS NATION"...

While 24% may still be crazy or dumb enough to support bush, they sure won't admit it in public around these parts anymore.

The number of Americans who believe the country is on the wrong track jumped four points to 66 percent.

I haven't seen anyone in the last year that will publicly support the Child in Chief. Even the hardcore supporters I knew are hanging their heads in shame. Sadly for them, it is their shame too... They were among the crackpots that voted for him.
Brewed by Connecticut Man1 at 10/17/2007 03:57:00 PM No comments:

Real News on the Three Branches of Government

Apparently all 3 branches are willing to cover their ears and shout "La La La La La" while the foundations of Democracy disappear before our very eyes.
Brewed by Connecticut Man1 at 10/17/2007 08:54:00 AM No comments:

A Note From Some Officers On Iraq

A snippet from the end of an LTTE in the WaPo today, written and signed by 12 Army Captains that have actually had their boots on the ground and their own lives on the line in Iraq.

This is Operation Iraqi Freedom and the reality we experienced. This is what we tried to communicate up the chain of command. This is either what did not get passed on to our civilian leadership or what our civilian leaders chose to ignore. While our generals pursue a strategy dependent on peace breaking out, the Iraqis prepare for their war -- and our servicemen and women, and their families, continue to suffer.

There is one way we might be able to succeed in Iraq. To continue an operation of this intensity and duration, we would have to abandon our volunteer military for compulsory service. Short of that, our best option is to leave Iraq immediately. A scaled withdrawal will not prevent a civil war, and it will spend more blood and treasure on a losing proposition.

America, it has been five years. It's time to make a choice.

While I have been against this illegal invasion and occupation of Iraq from the get-go, and for all of the reasons that have been proven to be correct, it is now time for all of those yipping and yapping, chickenhawk, never-ending war, cheerleaders to stand up and be counted.

What was it that was said last week? Oh yeah... Lt. Gen. Ricardo Sanchez, the former top commander in Iraq, called the war “a nightmare with no end in sight.”

It is time to end this nightmare.

The director of the National Counterterrorism Center, Scott Redd, tells NBC News that, “in the short term,” the Iraq war “probably” has created a “giant recruiting tool” for terrorists. In response to a question about whether the US is generally safer after having invaded Iraq, “tactically, probably not,” Redd responded.

I'm back and will slowly be getting back into the swing of things... For now, TPM Media takes a look at the failed warmongering set and their repeat of Iraq mistakes when it comes to their shrill screaching on Iran:

Getting bored with Iraq? Nothing ever changes? Well, how about war with Iran? The drumbeat for military action against Iran has been a low rumble building gradually throughout the year. We gauge just how high the pitch has risen in today's Sunday Show Roundup episode of TPMtv

No doubt that the pitch coming from the conservative bed wetting set continues to be high and well outside of reality.
Brewed by Connecticut Man1 at 10/15/2007 09:14:00 AM 3 comments: