More Whackamole and the game is rigged

Here is a preview of what the juice-box politicians will be throwing out as those success stories that mean we have to stay in Iraq for forever and a day:

According to the officials, Gen. David H. Petraeus is expected to propose the partial pullback in his September status report to Congress, when both the war's critics and supporters plan to reassess its course. Administration officials who support the current troop levels hope Petraeus' recommendations will persuade Congress to reject pressure for a major U.S. withdrawal.

But it does not necessarily follow that Petraeus would call for reducing the overall number of troops in the country. Instead, he could move them to another hot spot, or use them to create a reserve force to counter any rise in violence.

More whackamole where the game is rigged against American citizens and, even worse, against the American soldiers forced to endure endless war from the failed bush propaganda administration. And just remember that the January surge ESCALATION is just a rinse and repeat pattern of failure.

Despite Bush's repeated statements that the report will reflect evaluations by Petraeus and Ryan Crocker, the U.S. ambassador to Iraq, administration officials said it would actually be written by the White House, with inputs from officials throughout the government.

Just another White House snowjob that will barely resemble the facts on the ground. When will those republican children and their inbred neocon kissing cousins ever learn? 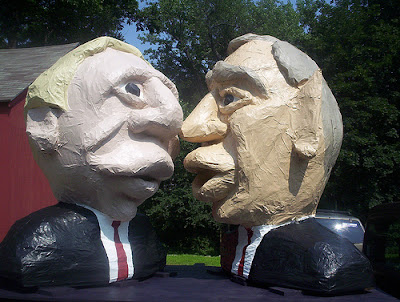 Joe Lieberman and George Bush about
to do the neocon wild thing...
Kiss and make war.
This is what happens when you marry car magnet faux support for the troops in an endless war they wouldn't let their children fight even if they might have, by some miracle of logic, wanted to because it is beneath their important positions in American society with the endless war, lying and traitorous military profiteers club.
Brewed by Connecticut Man1 at 8/15/2007 11:14:00 AM

Galabingo offer a free bonus for new players and there is a new winner every 15 seconds as more bingo players enjoy Galabingo online.
Visit http://www.squidoo.com/galabingo_online/

Hie megha... I would prefer if you did not spam my Blog.