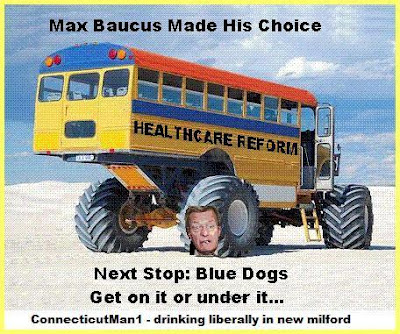 From itskevin over at dailykos:

According to The Note over at ABC News, there might be some real meat to the rumors that rank-and-file Senate Democrats and party leadership may throw in the towel on Max Baucus' super-secret, interminable bipartisan talks.

With the health care bill languishing in the Senate and under fire in the House, Democratic leaders are quietly preparing for Plan B.

Under the scenario now being discussed, bi-partisan talks would be aborted and parliamentary maneuvers used to force the bill through with a party-line vote.

And from an inside source:

Senate Finance Chairman Max Baucus, D-Mont., still has time to try to work out a deal with his Republican counterpart Chuck Grassley, but fellow Democrats are growing restless.

"There’s rising disgruntlement with how Baucus has handled this," a senior Democratic aide tells ABC News. "We have to look at other options."

Let's hope this is true. For our part, we might be able to exert real pressure in forcing our leaders to take a stand - and sooner rather than later.

Read the rest of the diary for some action items...

Via the Hartford Courant:

U.S. Senator Christopher Dodd has been diagnosed with early-stage prostate cancer. Dodd is scheduled to undergo surgery during the Senate's August recess and said he expects to be back at work after a "brief recuperation" at home. "It's something that's very common among men my age,'' said Dodd, who is 65 and the father of two young daughters. "In fact, one in six men will be diagnosed with prostate cancer at some point during their life.'' Dodd, a Democrat who is up for re-election in November 2010, said he feels fine. "As you have probably noticed, I'm working some long and hard hours lately,'' he said. "And that will continue."

I am certain that everyone wishes him the best in his treatment and hopes for a speedy recovery. We need his voice to help fight for changes in health insurance and healthcare so that every American can have a chance to receive the kind of treatment he will receive. Via tparty, An email from Sen. Dodd to supporters:

I wanted to let you know that I've been diagnosed with an early stage of prostate cancer.

This diagnosis is very common among men my age. In fact, one in six men will be diagnosed with prostate cancer at some point during their life.

Luckily, a routine test allowed my doctor to catch it at a very early stage, and my prognosis is excellent - we expect a full and speedy recovery.

I want to assure you that I'm feeling fine. As you know, we've been working hard to pass health care legislation and reform our nation's financial system to protect consumers, and that hard work will continue.

After the Senate adjourns at the end of next week, I'll have surgery to remove the cancer. After a week or two of recuperation, I expect to be right back to work.

After all, as a Member of Congress, I have great health insurance. I was able to get screened, seek the opinions of highly skilled doctors, consider all the available options, and choose the treatment that was right for me.

And I know you'll agree that every American deserves the same ability.

We have health care legislation to pass - and an election to win. And I can't thank you enough for your support.

A press conference is scheduled for 2pm today.