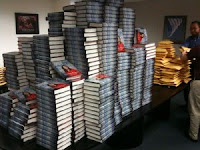 TRex has extracted and documented the bulk of the knowledge that can be had from Sarah Palin's new book, Going Rogue.

Trust me on this, there is a valuable lesson to be had from her book that every Blogger, journalist and pundit should be sharing with anyone that is truly interested in the politics of this nation. (H/T to Mike Finnigan at C&L's "Mike's Blog Roundup")
Brewed by Connecticut Man1 at 11/21/2009 10:06:00 AM 7 comments: 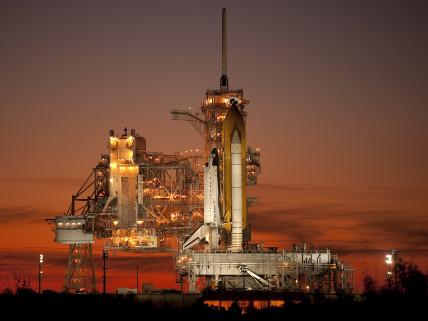 About 8 minutes before the shuttle blasts off:


At NASA's Kennedy Space Center in Florida, space shuttle Atlantis and crew are nearing liftoff at Launch Pad 39A, prepared to begin the STS-129 cargo-delivery mission to the International Space Station.

The countdown clock is holding at T-9 minutes. This is the last built-in hold today and is scheduled to last about 45 minutes.

The weather forecast remains "go" at the launch site and the Transoceanic Abort Landing, or TAL, sites as the countdown clock ticks backward toward an on-time launch at 2:28 p.m. EST.


And there are only 5 more missions to go before the Space Shuttle will officially be retired:


Lift-off is planned for 1928 GMT (1428 EST) on Monday from the Kennedy Space Center near Cape Canaveral.

There are just five more shuttle launches scheduled before the planned retirement of the fleet in 2010.

The mission is set to include three spacewalks to store hardware on the outside of the orbiting outpost.


[update] The shuttle is safely off in space and some interesting interesting stuff is out there, as well:

A scarf belonging to famed aviatrix Amelia Earhart will circle the Earth repeatedly as part of the personal cargo being carried into space by the astronauts of space shuttle Atlantis’ STS-129 mission.

Albert Bresnick was a personal photographer to Earhart, and now, astronaut Randy Bresnick is rekindling the family connection. The Marine aviator and first-time space flier received the white, green and red scarf from the 99s Museum of Women Pilots in Oklahoma City, an organization of female pilots that formed with the help of Earhart. Randy Bresnick is also bringing along a photo from the Amelia Earhart Birthplace Museum in Atchison, Kan.

In 1932, Earhart became the first woman to fly solo across the Atlantic Ocean, becoming in the process a prominent and celebrated adventurer. She, along with her navigator, disappeared over the Pacific Ocean five years later while trying to become the first woman to circumnavigate the globe in an airplane.

The remaining crew members of STS-129 have chosen a wide assortment of medals, shirts, patches and even a thumb drive to commemorate their 11-day venture to the International Space Station.

A cycling jersey from Lance Armstrong's LiveStrong Foundation will travel on the flight, completing the distance in seven minutes that Armstrong and the cyclists in the peloton rode in three weeks during the Tour de France.

Veteran astronaut Charles O. Hobaugh, also a Marine pilot, commands the mission that will deliver a pair of racks loaded with equipment to the station.

First-time shuttle Pilot Barry E. Wilmore has seen to it that Tennessee Technical University is well-represented in the commemorative assortment known as the Official Flight Kit. The school, which Wilmore graduated from with a master's in electrical engineering, will see a thumb drive, purple and gold placard, gold medallion, and a stuffed-toy eagle make the trip into space aboard space shuttle Atlantis.

The toy eagle will be joined by a stuffed-toy blue spider from the University of Richmond, the alma mater of veteran Mission Specialist Leland Melvin. A football jersey from Melvin's Heritage High School days also will make the trip. Melvin was drafted in 1986 by the NFL's Detroit Lions and took part in training camps with the Dallas Cowboys and Canadian Football League's Toronto Argonauts.

MikeForeman, an experienced spacewalker from the STS-123 mission, is marking his hometown of Wadsworth, Ohio, with patches from the city's police and fire departments.

Harvard Medical School and the Massachusetts Institute of Technology are symbolically carried into space in the form of a flag from Harvard and a copy of MIT's charter. First-time flier and physician Robert L. Satcher Jr. graduated from both schools during his educational career.

When the shuttle returns to Earth to end the STS-129 mission, the personal commemoratives will be removed and returned to the astronauts. Typically, the items are then returned to their sponsoring institutions or presented as gifts by the astronauts as a way to inspire future explorers.