How Does Your Candidate Measure Up? 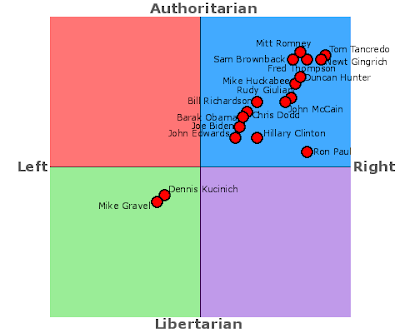 Hillary Clinton, Barack Obama, John Edwards, Chris Dodd, Bill Richardson, Joe Biden... They are all conservatives, as moderate as some of them may be, they are conservatives nonetheless.
Brewed by Connecticut Man1 at 8/16/2007 12:02:00 PM

That's why I flirted with Gravel and now am marrying Kucinich.

I just want people to think about who they throw their support at. After the elections they ought not to be complaining that the Dems are still too far right wing if they support any of those more conservative candidates.

It's amazing how much the political center in this country has moved and continues to move rightward. I wonder where Feingold, had he entered the race, would end up on this plot.

"It's amazing how much the political center in this country has moved and continues to move rightward."

I am taking a guess but Feingold would probably end up very close to Edwards, maybe slightly closer to the center.