Via ctblogger at HatCity Blog, New Milford's Rev. Gail Keeney-Mulligan talked about immigration, exploitation and and how it relates to religion last Sunday: 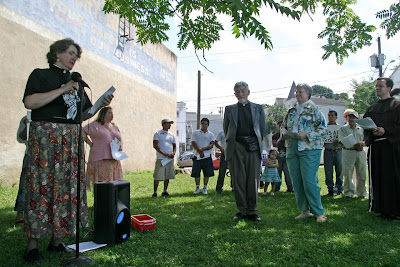 ctblogger promises updates on the event:

I'll have more details on what happened at the prayer vigil, including my rather intense confrontation with one of Elise Marciano's wackos who disrupted the event.

I am guessing there was some sort of nutty immigrant bashing involved. Figure the odds, eh?

The NewsTimes did a writeup on the event:

The unity vigil was organized by Danbury resident Jean Hislop and the Rev. Gail Keeney-Mulligan of St. John's Episcopal Church with the goal of bringing respect and dignity for the immigrants in the area.

"This vigil was held in recognition that all of us hold the same dreams and aspirations," Hislop said. "We hold the same value in life, liberty and the pursuit of happiness, regardless of our race, our religion or our legal status.

Hislop said the "blatant racism" seen in e-mails being circulated, reader responses to immigration articles on The News-Times Web site, and things she has heard people say to each other on the streets of Danbury had to be addressed and dispelled.

When there are 185 comments on a NewsTimes article there usually is not much point sifting through the garbage that is in there. It is always the same people bashing immigrants using different screen names. Don't get me wrong, there are always some thoughtful comments too, BUT... The thoughtful commenters are wasting their time if they think that the bigots and xenophobes are there to debate honestly.
Brewed by Connecticut Man1 at 8/15/2007 09:22:00 PM

You are truly a moron to say that people who are against ILLEGAL IMMIGRATION are posting multiple times under different screen names, sorry idiot, there are more of us who want to protect America than you. You need to take a look at Roy Beck's "Immigration by the Numbers" to take a peek at the legacy you are leaving your children and grandchildren. Oh, I see, the typical liberal comment, we are bigots and xenophobes because we happen to insist that the current immigration law is enforced..Get a grip on reality..

I am sorry that you are not mature enough to handle the truth, and that it likely disappoints you to know that truth has a liberal bias, and that other people have to put up with your sad arguments, slurs, and bed-wetting attitude... But most of all I feel sorry for you feeling you need to stalk me all the way over from a newspaper comments section to my Blog just to insult me only because I pointed out some basic facts.

Perhaps you have your panties all in a twist because you are the sock puppet that was outed?