"What is that? Impeachment?"Judge asks how to stop illegal spying

Via Matt at ThinkProgress, and very disturbing given the outlandish criminal behaviour of the bush administration:

Federal lawyers argued that “almost nothing about the substance of the government’s conduct could be talked about in court,” but that the judges must give executive branch claims of state secrets the “utmost deference.”

The three judges on the court were unsatisfied with the argument, offering various stinging comments and rebuttals:

- “Is it the government’s position that when our country is engaged in a war that the power of the executive when it comes to wiretapping is unchecked?” asked Pregerson.

- “Every ampersand, every comma is top-secret?” queried Judge Michael Daly Hawkins about a withheld document.

- “”Are you saying the courts are to rubber-stamp the determination of the executive of what’s a state secret? What’s our job?” asked Pregerson.

- “I feel like I’m in Alice and Wonderland,” observed McKeown.

When Deputy Solicitor General Greg Garre argued that “other avenues” than the court system were the proper forum for complaints about government surveillance, Pregerson shot back:

“What is that? Impeachment?”

3 judges, all of them very concerned about the legality of the programs, and even more so by King Lame Duck claims that he can be trusted and that the judges can't see the evidence at all in order to decide the case. 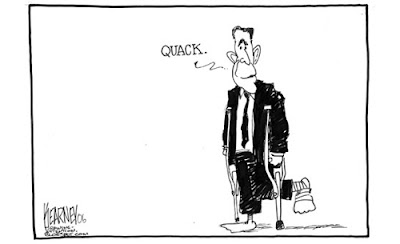