No Delays For Traitor Libby

Via Bloomberg: (and a h/t to Daily Muck)

Libby may be behind bars within weeks after a three-judge panel of the U.S. Court of Appeals for the D.C. Circuit today denied his request for release. The decision will increase pressure on President George W. Bush to decide soon whether to pardon Libby, 56, as the former White House official's supporters have urged.

Libby ``has not shown that the appeal raises a substantial question'' under federal law that would merit letting him remain free, the court said. 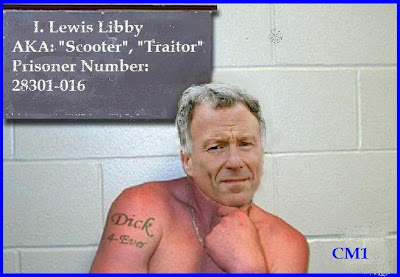 Scooter Libby has a new name: inmate number 28301-016. That's according to the Bureau of Prisons, which is ready and waiting for Libby's arrival.

Via Reuters, the appeal wasn't even a close call:

The three-judge panel of the appeals court rejected Libby's request in a one-paragraph order, ruling he has not shown that his appeal "raises a substantial question."

The ruling was issued by all three members of the appeals court panel. Judges David Sentelle and Karen LeCraft Henderson were appointed by Republican presidents while Judge David Tatel was appointed by a Democratic president.

Is the pardon clock ticking? Bush has always been by the book on pardons in the past.

NY Times on the Libby beat:

Judge Reggie B. Walton said today that he found no reason to postpone Mr. Libby’s sentence of two and a half years in prison for four felony counts. Defense lawyers had asked that he be allowed to remain free while pursuing appeals.

Judge Walton’s decision means that the defense lawyers will probably ask a federal appeals court to block the sentence, a long-shot move. It also sharpens interest in a question being asked by Mr. Libby’s supporters and critics alike: Will President Bush pardon Mr. Libby?

As for bushies' past record on pardons, well? I have already covered that a couple of times:

The only thing we have on record concerning pardons from Bush is something I caught in March from Newsweek:

No (scape)goats in this book. But according to Isikoff and Hosenball at Newsweek this is what the (supposed) fall guy can expect:

"Those regulations, which are discussed on the Justice Department Web site at www.usdoj.gov/pardon, would seem to make a Libby pardon a nonstarter in George W. Bush’s White House. They “require a petitioner to wait a period of at least five years after conviction or release from confinement (whichever is later) before filing a pardon application,” according to the Justice Web site.

“You know, I get asked about pardons on a lot of different cases. And there’s a procedure in place,” he said at first. When Bush added that he has been telling members of Congress who have contacted him about the matter to “look at the facts in the case,” Cavuto followed up: “So what are you saying?”

“I’m saying … there is a process in any case for a president to make a pardon decisions. In other words, there is a series of steps that are followed, so that the pardon process is, you know, a rational process,” the president answered."

Get ready for prison now, Scooter...
You have plenty of time before sentencing to get your affairs in order NOW, so there should be no reasons to delay your entering the system as soon as the sentence is pronounced.

As a side note on this:
How strained must the relationship between bush and cheney be, when cheney has to make his plea for a pardon on the national news? Since when do Republicans take their "inner business dirty dealings" public like that? They usually do that stuff behind closed doors.

I would say that things do look particularly bad for Libby, and certainly for his band of merry traitors that don't want to chance Scooter flipping them to avoid prison. I have to start thinking about the possibility that MAYBE bush had nothing to do with the leaking, and as long as there is no pardon that line of reasoning might make sense. The reality is that as soon as bush does give a pardon to Scooter (if he does?), or anyone else that Scooter may flip, it is pretty much an admission of bushies' own guilt.

No matter how you look at it, there is no way to justify pardoning Scooter Libby without it being an admission of guilt by the President.

Any innocent President would be furious with Libby and wouldn't pardon him in a million years.

But Bush is not innocent. Libby lied for the President. And if Bush pardons Libby then we will know for certain that the President himself is the one that should be doing jail time for the crime that Libby covered up.

Yes, we shall. Unfortunately, we may have to wait for the dying days of this presidency to get the answer, as to the extent of bush's involvement in the leak.

The decision to send Libby to jail before an appeal doesn't change the possibility of a last minute out the door pardon from bush in the dying days of his present lame duck presidency, but it does put the screws to all those involved in the leak sooner rather than later.

And make no mistake about this: Any pardon from bush, now or later, is enough proof of bushies' involvement in this treasonous act against our nations' security.