Rendition on a conservative budget... 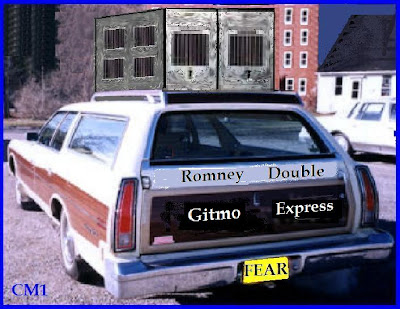 Via Crooks and Liars:

As if Mitt Romney doesn’t have enough on his mind, now he has to contend with angry dog owners.

The reporter intended the anecdote that opened part four of the Boston Globe’s profile of Mitt Romney to illustrate, as the story said, “emotion-free crisis management”: Father deals with minor — but gross — incident during a 1983 family vacation, and saves the day. But the details of the event are more than unseemly — they may, in fact, be illegal.

The incident: dog excrement found on the roof and windows of the Romney station wagon. How it got there: Romney strapped a dog carrier — with the family dog Seamus, an Irish Setter, in it — to the roof of the family station wagon for a twelve hour drive from Boston to Ontario, which the family apparently completed, despite Seamus’s rather visceral protest.

Massachusetts’s animal cruelty laws specifically prohibit anyone from carrying an animal “in or upon a vehicle, or otherwise, in an unnecessarily cruel or inhuman manner or in a way and manner which might endanger the animal carried thereon.” An officer for the Massachusetts Society for the Prevention of Cruelty to Animals responded to a description of the situation saying “it’s definitely something I’d want to check out.”

like I needed another reason to hate Mitt Romney. Hell, the cat killing incidents didn't seem to stop Bill Frist, that soulless monster..

Thanks! Did you got to the Canada Day fireworks last night in New Milford? :)