The 50-year-old woman launched a hunger strike to get a face-to-face meeting with Lieberman but was repeatedly rebuffed, according to Code Pink. However, Lieberman's staff has met with her on the issue.

Angeline was 15 days into her hunger strike and had lived off of clear liquids, according to Code Pink member Medea Benjamin. At one time she was granted a meeting, but the face-to-face was canceled by Lieberman’s office, the group said. 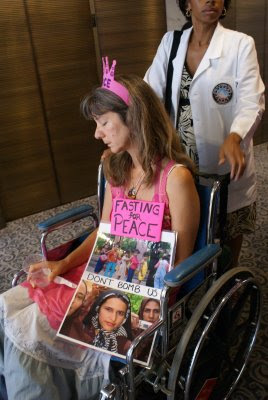 I hope the she is going to be OK. I like

and what they stand for. All of them stand up every day for things that we all believe in. What a spineless sack of lying neocon chicken crap we we have for a Senator here in Connecitcut.

That’s for stopping by at my site and come back anytime.

I can't say anything bad about another state's senator; both senators from South Carolina are so far up Bush's and Rove's rear that their colons must be sparkling clean. While Lindsey does at times differ from the established GOP viewpoint he always seems to cave in at the last minute. Any "maverick" label for him would be an overstatement by a least a light-year of two. And Senator Jim DeMint is joked, even amongst some conservatives, about not have an original thought in his life. This last sentence is usually put another even worse way but I won't cuss here.

Given the politics of today? Sometimes you just have to cuss. This blog had an NC-17 rating. heh

I checked it today and it has an "R" rating because of these offending words:

"This rating was determined based on the presence of the following words:

All of the Dick references are from republicans cheney and armitage (Their names). The anti-torture position of this Blog is self-evident given the material. I'll have to look for the hell references? (Probably references to torture?) And the sex reference is a quote from from republican chris shays calling the torture a "sex ring".