Nutmegger Picked in First Round of NHL Draft

The Montreal Canadians used their second first-round pick (22nd overall) to grab New Canaan native Max Pacioretty, a guy they hope will fill the slot of power forward in the future. 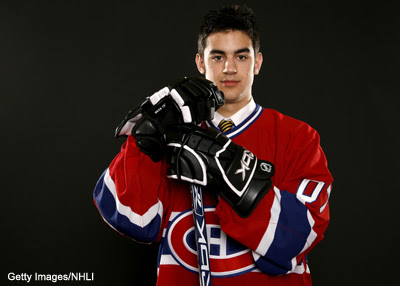 “I’m thrilled to be chosen by the Canadiens, but I really didn’t expect it,” admitted Pacioretty, who was invited to Montreal last Wednesday for testing with other prospects for this year’s draft. “Even though I thought I tested well, I didn’t think they would end up picking me. I couldn’t believe it when I heard my name.”

If comparisons are any indication, the Canadiens may have a special player on the horizon.

“I’ve been sometimes compared to Keith Tkachuk,” revealed Pacioretty. “I like to play physical and I give it all I’ve got whenever I’m sent out on the ice. My goal is be a fan favorite so I can fire up the crowd and bring that energy to my teammates.”

The native of New Canaan, CT turned it on in the second half of the season, bolstering his draft day stock.

“Early in the year I had some great games on some nights and I was invisible on others,” admitted Pacioretty, who saw his NHL Central Scouting ranking among North American skaters rise from No. 23 to No. 16 this season. “I knew I had to be more consistent and that’s what I did. I’m just proud to have been chosen in the first round.”

Canadians management had this to say about Pacioretty:

The Canadiens' Director of Player Recruitment and Development was just as giddy about his second first-round pick on Day 1 of the 2007 draft, Max Pacioretty.

“This is a player with all kinds of power and strength,” said Timmins of the 6-foot-2, 203-pound winger. “He’s also got all kinds of intangibles going for him. And he’s not only got the size, he also got excellent ability.”

When the dust settled after the opening round Friday night, the Canadiens had stuck to their pre-draft game plan.

“We made it clear that we were looking for players who had size, were powerful, talent and had character,” reaffirmed Timmins. “And that’s exactly what we’ve done by drafting McDonagh and Pacioretty.

“We’re also pleased to see that they’ve enrolled at excellent schools for next year,” added Timmins. “Both Wisconsin and Michigan produce very good hockey players. We also know that both of these players will benefit from great physical conditioning coordinators who will ensure their proper development.”