Take a good hard look at the new face of NOM

The newest member of the anti-marriage equality group NOM, Orson Scott Card, is just a plain old lunatic that clearly proves, in his own words, that this is all about treating homosexuals as less than equal.

The hypocrites of homosexuality are, of course, already preparing to answer these statements by accusing me of homophobia, gay-bashing, bigotry, intolerance; but nothing that I have said here -- and nothing that has been said by any of the prophets or any of the Church leaders who have dealt with this issue -- can be construed as advocating, encouraging, or even allowing harsh personal treatment of individuals who are unable to resist the temptation to have sexual relations with persons of the same sex.

Not Card - He isn't homophobic... And he isn't advocating harsh treatment of them. Is he?

After blabbering on about how homosexuals must admit that they are sinning according to the rules of Card's personal lifestyle choice, his own personal religious views that he is trying to force on everyone else, he later goes on to discuss appropriate punishment for homosexuals:

This applies also to the polity, the citizens at large. Laws against homosexual behavior should remain on the books, not to be indiscriminately enforced against anyone who happens to be caught violating them, but to be used when necessary to send a clear message that those who flagrantly violate society's regulation of sexual behavior cannot be permitted to remain as acceptable, equal citizens within that society.

And he has the gall to title the piece "The Hypocrites of Homosexuality"... 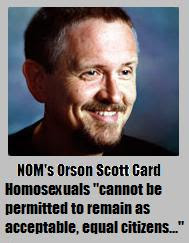 You see, this has and always been about equality. The loonies at FIC, NOM and other anti-marriage equality groups are truly radical wingnuts that advocate Christianist hate and for treating others as second class citizens.

The latest face they have added to their stable of hate at NOM proves that it is all about equality.

But these days they know that they have to hide that fact because their real views are about as radical and un-American as it gets.

Chele, over at MLN, shows that Orson Scott Card has some serious problems with the US government. It is safe to say that his words do advocate for overthrowing the government and tossing The Constitution into the garbage:

When we're tempted to dismiss the anti-marriage equality crowd as a bunch of passe cranks who are losing their battle against civil rights and who will soon disappear to lick their wounds, we need to remind ourselves that their organizations harbor a lot of seriously deranged people. Family Institute of CT on a local level, and the National Organization for Marriage on the larger stage have the potential to be much more dangerous than they appear at first glance.

People for the American Way's Right Wing Watch has noted that the science fiction writer Orson Scott Card has joined the board of NOM. PFAW shares an interesting quote from Card, which appeared last July during the Prop 8 battle, in the Mormon Times:

How long before married people answer the dictators thus: Regardless of law, marriage has only one definition, and any government that attempts to change it is my mortal enemy. I will act to destroy that government and bring it down, so it can be replaced with a government that will respect and support marriage, and help me raise my children in a society where they will expect to marry in their turn. [...] American government cannot fight against marriage and hope to endure. If the Constitution is defined in such a way as to destroy the privileged position of marriage, it is that insane Constitution, not marriage, that will die.

NOM has put a man who advocates overthrowing the American government on their Board of Directors. One can only assume that NOM and their followers either agree that the government is their "mortal enemy" and that the Constitution is "insane" or at least have no problem with people advocating that the government of the United States be destroyed and brought down.

But these people at NOM aren't the radicals.

We are. Because. we. preach. real. equality.

And they aren't homophobes preaching violence, either...

Yeah - Card is a peach. The bad guys in his science fiction book are called the buggers.

I saw that post of yours but his political writings, slightly surprisingly, are even worse than his fiction.