Young Republicans on Sex and Iraq 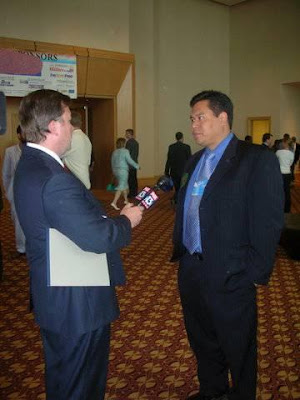 On Tuesday afternoon, Glenn Murphy Jr. e-mailed media outlets a letter announcing his resignation from both positions, citing an unexpected business opportunity that would prohibit him from holding a partisan political office.

Now... Just what was that great business opportunity?

The chairman of the Clark County Republican Party — who last month was elected president of the Young Republican National Federation — has resigned both posts, apparently in the wake of a criminal investigation.

However, the Clark County Sheriff’s Department on Friday began investigating Murphy for alleged criminal deviate conduct — potentially a class B felony — after speaking with a 22-year-old man who claimed that on July 31, Murphy performed an unwanted sex act on him while the man slept in a relative’s Jeffersonville home.

Murphy, a 33-year-old Utica resident, has not been arrested nor has he been charged with a crime. A copy of the police report has been posted on an politically focused Internet site and another was provided to a reporter with The Evening News and The Tribune on Tuesday evening.

Ok... Sounds like Murphy might be thinking about a somnambulic version of Florida state Rep. Bob Allen's business model, BUT without money changing hands.

Sexual Perversity in Jeffersonville?
Or "About Last Night"

It's not like this Young Republican has a history of breaking the law, right?

In 1998, a 21-year-old male filed a similar report with Clarksville police claiming Murphy attempted to perform a sex act on him while he was sleeping. Charges were never filed in that case.

If he isn't breaking the law, he certainly has some typically sick Republican ideas of what sex is all about?

In a shocking police report filed by the Clark Co. Sheriff's office, Murphy is accused of sexually assaulting another man on Saturday, July 28, 2007, while he lay sleeping in his bed. The alleged assault of the 22-year-old man took place in the Jeffersonville, Indiana home of his sister following a Young Republican party in which both Murphy and the 22-year-old man had been in attendance. The victim's sister had urged both men to spend the night at her home because of the amount of alcohol the two had consumed during the party. The victim awoke in the morning to find Murphy performing oral sex on him according to the report. When the victim asked Murphy what he was doing, he responded: "He was holding his dick with one hand and sucking my dick with his mouth." The victim then pushed Murphy away, gathered his personal belongings and left. Murphy was later confronted with the charges by the victim's sister according to the report. The sister says Murphy admitted to her that he performed the sex act on her brother.

It certainly sucks to be Murphy right now.
Via Yoss... A money quote:

Thanks to exmearden for this quote:

"I will essentially be the mouthpiece and effective leader for the tens of thousands of Young Republicans, 18 to 40, across the country," said Murphy, who took a vacation following the organization’s convention and returned to Clark County last weekend.

Leaving little doubt how he originally got the overwhelming support of Young Republicans across the nation... And even less doubt why the Young Republicans are busy scrubbing their sites of the many pictures and references to Murphy they had all over the net...

The Young Republicans have quietly and quickly scrubbed any mention of their fallen leader, although the Indiana site hasn't.

Google Cache reveals that the site had Murphy all over it, including a YouTube appeal for GOP presidential contenders to participate in the upcoming YouTube debate. The video has since been removed as well.

Here is the Google Cache of the now-defunct Team Murphy! campaign website.

In other news, Romney's Young Republican spawn seems to believe they are above serving the country by actually going to the endless occupation of Iraq they claim support - another republican perversion, this time, of logic - and would prefer to try and doom this nation with another 4 years of whackjob GOP presidential doom:

Republican presidential hopeful Mitt Romney on Wednesday defended his five sons' decision not to enlist in the military, saying they're showing their support for the country by "helping me get elected."

Romney, who did not serve in Vietnam due to his Mormon missionary work and a high draft lottery number, was asked the question by an anti-war activist after a speech in which he called for "a surge of support" for U.S. forces in Iraq.

The woman who asked the question, Rachel Griffiths, 41, of Milan, Ill., identified herself as a member of Quad City Progressive Action for the Common Good, as well as the sister of an Army major who had served in Iraq.

"Of course not," Griffiths said when asked if she was satisfied with Romney's answer. "He told me the way his son shows support for our military and our nation is to buy a Winnebago and ride across Iowa and help him get elected."

I think that if these Romney chickenhawks are unwilling to put their lives on the line, and spill their own blood in Iraq's desert sand in an endless occupation that they falsely claim to support, then they suck just as much as their fellow Young Republican, Murphy.
Brewed by Connecticut Man1 at 8/08/2007 03:08:00 PM

Murphy is classic closeted-gay, isn't he? Under my definition of rape, that's just what he did.

When will we be free of these sexual predators, so that they can go back to operating in the dark? (Forget curing them of anything; some days, I think it would be a fine idea to just throw all rebiblicans in jail and get it over with...)

BTW, inspired by you, I started a blog-for-DL in Nashville, called "Once Upon a Pint". Thanks for the idea!

"When will we be free of these sexual predators"

My guess is never.

The media is less credible than most of the left-Blogosphere.

Just curious here, BUT just how, exactly, are they protecting any kids when they don't tell you exactly what you need to know to protect your kids from people like Murphy? This is a 33 year old man that is put in charge of College aged kids, kids in the age range that he seems to like to rape.

This is MUST KNOW information for every parent. If the MSM doesn't report on it fully, the only ones they are protecting is Murphy and the GOP. And more kids would end up becoming victims in the future.