Notice something odd about these three protesters that are on the ground while being arrested during the protest of the Security and Prosperity Partnership meetings between the Three Amigos (Bush, Harper and Calderon) in Montebello, Quebec? 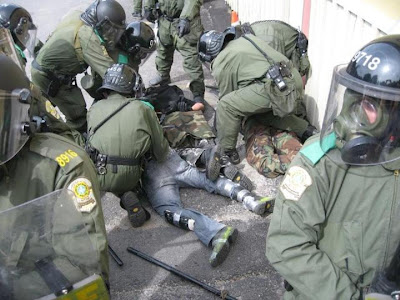 While you think about it watch this video of protesters in Montebello for all of the story:

Now that you know what the real protesters are talking about... Take another look at the same pic with circles around parts of two of the "arrested protesters" and one of the arresting police officers: 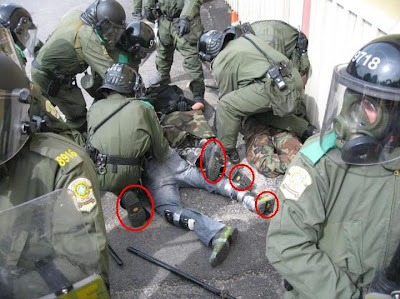 The three are confronted by protest organizer Dave Coles, president of the Communications, Energy and Paperworkers Union of Canada. Coles makes it clear the masked men are not welcome among his group of protesters, whom he describes as mainly grandparents. He urges them to leave and find their own protest location.

Coles also demands that they put down their rocks. Other protesters begin to chime in that the three are really police agents. Several try to snatch the bandanas from their faces.

Rather than leave, the three actually start edging closer to the police line, where they appear to engage in discussions. They eventually push their way past an officer, whereupon other police shove them to the ground and handcuff them.

Late Tuesday, photographs taken by another protester surfaced, showing the trio lying prone on the ground. The photos show the soles of their boots adorned by yellow triangles. A police officer kneeling beside the men has an identical yellow triangle on the sole of his boot.

The Toronto Star actually ran the story as well. There are records of four arrested protesters at the summit, and none of these three alleged police officers are among those arrests according to the news reports.

Here is the other CUPA photo that shows the boots of the third protester being arrested, just so you can see it and decide on your own: 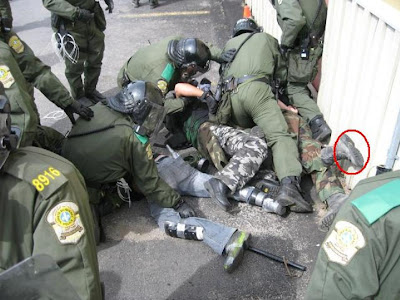 To myself, it is pretty obvious from the photo and video evidence that they are cops and that as soon as they realized their cover was blown they moved to the safety of their fellow police officers. And they purposefully walked right into their own arrests, putting up little to no real fight for supposed shit disturbers, rather than have their faces on the national news if they had been unmasked. And given the police issue boots they are wearing they certainly walk the walk.

If they are doing this in Canada, and this is pretty good proof that they are, IMHO, then do you have any doubts about them doing this here in the good old US of A?

[update] skippy the bush kangaroo offers up some more links on this:

addendum: anonymous tells us you can find more about this at reddit, at cbc news, at the globe and mail (including a video), and les enrages.

Also of note is that when they are on the ground being arrested none of the police officers are really at the ready, batons drawn, and one of the protesters just lies there compliantly with his hands behind his back AND has no visible cuffs (or ties) on his wrists. Yeah... Real shit distuber protesters, huh?

And then the police finally walk them off, cuffed, BUT without removing their hats or bandannas. Like that is real. Are they hiding something? DUH! The identity of their fellow officers.

[update deux] Hey Canada! Does anyone recognize this guy? Well, other than his fellow police officers, eh? 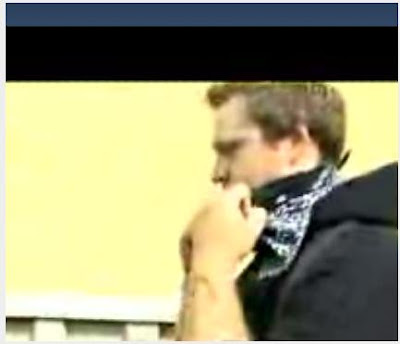 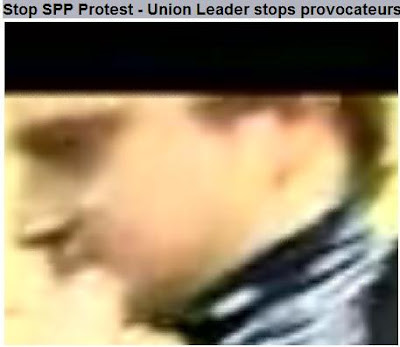 And the ruthless liberal Bloggers are on a manhunt up north...

Nice work on the large hi-res pictures. Some comments have been made at a couple of the posts on this that the yellow tags on the bottom of the boots didn't prove anything, because they are common to all steel-toed boots. If you look closely, you can clearly see that the tread patterns match too - they are the same, police issue boots.

These guys are SO nailed!

BTW, I've linked to you in my post on this story.

Thanks kindly for the link and the comment... I will gladly return the favour.

I didn't even need to see the boots evidence, you can tell from their odd behavior. Holding a rock and not throwing it. Walking around silently. Letting themselves get surrounded by the police.

This raises some much bigger questions: Why would the police go to such lengths to smear opponents of the SPP? Why is the SPP getting little mainstream media coverage and why are we not discussing what the Three Amigos' proposals are?

I agree with you on that, everything about them reeks of police, from their appearance to their behaviour.

good catch on that pic.

Just added more... And thanks!

Here's a major update to this story. The Quebec Surete (Provincial Police)
have admitted that these goons were indeed members of the force. Two Members of Parliament from the New Democratic Party have called for an inquiry.

I had read about the Surete du Quebec announcement, BUT thanks for the heads up on the NDP demands for an inquiry.