Via BSAlert and the ACLU:

The American Civil Liberties Union today filed a federal lawsuit against a former high-level White House staffer for enacting a policy that unlawfully excluded individuals perceived to be critical of the administration from public events where President Bush was present. The policy is laid out in an October 2002 "Presidential Advance Manual" obtained by the ACLU.

"The White House has gone too far in its attempt to make dissent invisible," said Chris Hansen, a senior ACLU attorney who is lead counsel in this case. "When taxpayers foot the bill for a public event, the president does not have the right to use a partisan litmus test to stack the audience with his political supporters."

The ACLU filed today's lawsuit after obtaining a heavily redacted version of the Presidential Advance Manual from the Justice Department. This manual is the Bush administration's guide for planning presidential events around the country, and it repeatedly instructs organizers about "the best method for preventing demonstrators," "deterring potential protestors from attending events," "designat[ing] a protest area . . . preferably not in view of the event site or motorcade route," and the like.

The ACLU said it is clear from the manual that the aim of the White House policy is to keep people who are critical of the president away from him and from the news media. According to the manual, "if it is determined that the media will not see or hear" demonstrators, then event staff can ignore them. The manual's guidelines are designed for use at all presidential events, not just fundraisers or political rallies. However, the ACLU noted that there are stricter constitutional guidelines for taxpayer-funded events than for privately- or politically-funded events.
(H/T to Buzzflash)

Via Nicole Belle at Crooks and Liars:

Okay, this is really creeping me out…anyone else see some disturbing parallels?

It’s official. To be patriotic in Russia is to be a fan of Putin, specifically a Putin Youth. During the celebration on June 12th of Independence Day (Russia from the Soviet Union in 1990), “the only groups allowed onto Red Square were the youth group Nashi” - which means “ours” - “the Young Guard and Young Russia,” according to Sergei, a Nashi supporter.

Tickets were carefully dispensed only to the faithful near the Krasny Ploshad Metro from a truck, I finally discovered after questioning a dozen reluctant people holding the tickets.

The 120,000-odd Putin Youth members are perhaps the most creepy demonstration of Putin’s “Back to the Future” cult of personality - youth groups created, supported, and used by the Kremlin to harass, bully and intimidate opponents and critics.

“The idea was to create an ideology based on a total devotion to the president and his course,” says a Kremlin adviser, Sergei Markov. Obsessed by the color revolutions in Ukraine and Georgia, the Kremlin decided to create their own loyal youth brigades.

The article goes into details that are just bone-chilling.

Just a whole hell of a lot beyond creepy, huh? 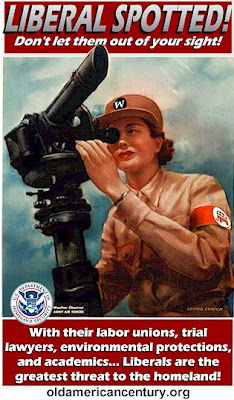 Minor update: Welcome to Crooks and Liars readers and thank you to Simbaud, they are one of the best national Blogs on the net IMHO, and most of their readers, like myself, seem to be pretty rabid fans of what they do everyday!
Brewed by Connecticut Man1 at 7/06/2007 05:29:00 PM

Didn't Bush once say something like he looked into Putin's soul and saw something he liked? I know thats not a direct quote but I believe the intent is the same. Lil' Bush and Putin really do have some disturbingly similar personality traits.

Yeah, that is pretty much the quote, to which Colin Powell replied "Mr. President, I have looked into Putin's eyes and all I saw was the KGB." (To paraphrase as well...) I think that Powell may have been a little closer to the truth.

Chimpy is a Stalinist to his monkey core. Those who oppose him are lucky to have not received a dispatch to the gulag.

The big problem with trying to do something like that is that the hardcore NRA types, I have little doubt, would be the first ones to take up arms and march on the White House. They kind of like their freedom too. And when people start disappearing in any country that has gotten that far along in coup, it is usually people with guns that start disappearing first. The problem is that too many of the gun lovers in our country have the means to match our military. I am not kidding about this either.