Debate - Obama was leading going in

And Obama was leading going out.
Even if there was no clear winner on debate points.

I wasn't too surprised with the snap poll results after the debate. Obama had the lead going in and all he had to do was look as credible as a candidate as the other guy on an issue that should have favored McCain. It was pretty much a tie on the issues, except for a few minor slams like Obama had on Iraq ("Wrong, wrong, wrong" - paraphrased).

Obama has clearly been head and shoulders above McCain.

McCain was behind going into the debate - trailing in the wake of his self propelled disaster filled campaign the last couple of weeks - and not hitting any homeruns when he needed at least a few didn't help him at all to get his flailing campaign back on track.

I find the whole thing about Obama supposedly not attacking enough - some Bloggers complain - and conceding points to McCain occasionally was a bit of a non-issue for Obama and a tell on McCain.

You can't make stuff like this up! Biden was out there doing the attack thing on the news shows after the debate... Where was Palin?

John McCain's poorly devised campaign plan to keep Sarah Palin hidden from the press and out of the debates revealed: 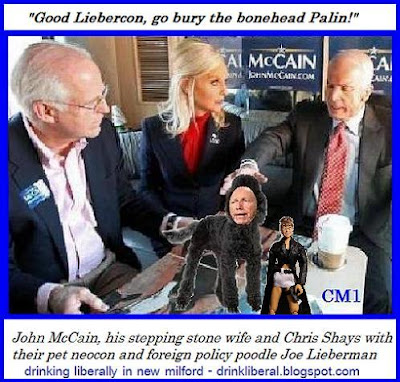 [update] Barack Obama really did something right... The independent voter numbers in every category are way beyond anyone's expectations in the Media Curves poll:

Media Curves found that 61% of Independents believed Obama won the debate, while 38.89% favored McCain as the winner. On each of the eight topics, Obama was a clear winner among Independents, with his highest score coming on the Iran issue - two-thirds of Independents thought he won this question. And, it's hard to argue with these three post-debate polls at RCP- they all have Obama outperforming McCain.

they are silencing palin -- they have to be freaking out about this week's debate -- after her couric trainwreck --- the mccain campaign must realize they can drill facts into her head, but intelligence and coherence are going to be a lot more difficult if not impossible

she had CUE cards with couric and still messed up and rambled.

as for the debate -- what i find missing was a reason for people to switch to obama from mccain or for independents to whole heartedly move over. i just didnt see that. obama was good - and he didnt alienate anyone. i just hope he brought people over -- maybe i didnt see something

Markos at dKos said the same thing about indies and others. He didn't see anything to change those voters' minds. Many Bloggers missed something because by every after debate poll measure he brought indies over. Obama was doing something right. He even swayed the over 50 crowd.

There were very few hard punches by either side.

I think just the demeanor, mannerisms and general behavior of the two contrasted and magnified by them standing side by side may be the big difference.

I think Obama was right in holding back on his attacks and presenting the image of someone in control, thoughtful and deliberative and calm. It was an effective contrast to "Johnny Angry," the gambler.

There are two more debates and there is still lots of time for Obama to deal with the "Double Talk Express."

I agree anon. Like I said:
"I find the whole thing about Obama supposedly not attacking enough - some Bloggers complain - and conceding points to McCain occasionally was a bit of a non-issue for Obama and a tell on McCain."

His not attacking as much has made him seem more level headed ESPECIALLY when McCain is trying to make minor points (and/or lies) into attacks.

Obama stands there and talks in depth on a subject for 2 to 5 minutes, conceding minor points that are universally understood to be true by everyone on earth and Obama never disagreed with to begin with, and demonstrating as good grasp on the subject matter - if not better - and then McCain says: "He doesn't understand" - Who looks stupid?

It makes McCain even more the fool whenever he uses words like "bipartisan" and maverICKY.

When Obama hits McCain it is on big things and he lets the little things go.

The key is recognizing the attacks that are the little things early and leaving them to the Blogs and surrogates - and hammering the big things in chorus with the surrogates and the Blogs.

It is how he has manged to say above the fray and McCain has not.

BTW: Thanks for the comments to both of you!