Is Racism On the Rise in the USA?

I am sadly leaning towards a "yes" considering the reports of things that are going on locally in Connecticut and, via Man Eegee, around the rest of the country:

I'm sure race has nothing to with the recent surge of nooses in the news since we are soooo over bigotry in the U.S.

Police are looking for whoever dangled a 3-foot rope with a small loop at its end from a tree outside a campus cultural center that is home to several black organizations. The incident is being treated as a possible hate crime.

"This is bigger than a noose," Black Student Union President Altmann Pannell told his fellow students, many of whom were wearing "Terps as one" buttons."

"This is bigger than a noose because we as a community know that something else is going on in this country," Pannell said to murmurs of agreement.
linkage

That "something else" is not missed by minority communties, especially when the disparities in justice are blatantly tied to the color of one's skin.

For a year, Jena (pronounced JEEN-uh), a poor mining community of 3,000 people, has been embroiled in racial tensions pitting the black community against white school officials and a white prosecutor. It began last August when a black student asked at an assembly if black students could sit under a tree where white students usually sat. The next day, two nooses hung from the tree.

Black parents were outraged by the symbolism, recalling the mob lynchings of black men. They complained to school officials. District superintendent Roy Breithaupt and the school board gave three-day suspensions to the white students who hung the nooses, overruling the recommendation of then-principal Scott Windham that the students be expelled.

The case of the Jena Six has been covered extensively by fellow bloggers, such as Hello, Negro with information on how to donate to the defense fund; also My Right Mind! who offers a slew of tips to assist these young teens.

Nooses are more than just complex slip knots in a rope - they are both symbolic and directly representative of torture, murder and racist mob rule.

Man Eegee has some more bad news on this sad reality check...

But before you go there, I want you to think about this:

Lynching is sometimes justified by its supporters as the administration of justice (in a social-moral sense, not in law) without the delays and inefficiencies inherent to the legal system; in this way it echoes the Reign of Terror during the French Revolution, which was justified by the claim:

"Terror is nothing other than
prompt, severe, inflexible justice." 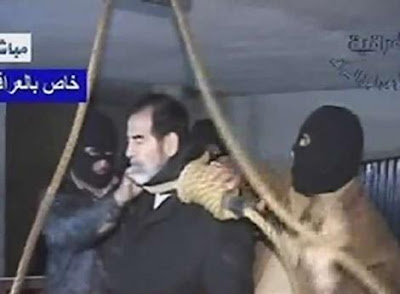 What are some of the possible reasons why racism seems to be on the rise in the Good Ol' USA? Hey! It's not like anyone in our government would ever encourage this kind of terrorizing behavior with its own actions and ideologies...

The "traditional" conservative Claes G. Ryn has argued that neoconservatives are "a variety of neo-Jacobins." Ryn maintains that true conservatives deny the existence of a universal political and economic philosophy and model that is suitable for all societies and cultures, and believe that a society's institutions should be adjusted to suit its culture, while Neo-Jacobins

are attached in the end to ahistorical, supranational principles that they believe should supplant the traditions of particular societies. The new Jacobins see themselves as on the side of right and fighting evil and are not prone to respecting or looking for common ground with countries that do not share their democratic preferences. (Ryn 2003: 387)

Further examining the relationship between Neoconservatism and moral rhetoric, Ryn argues that

Neo-Jacobinism regards America as founded on universal principles and assigns to the United States the role of supervising the remaking of the world. Its adherents have the intense dogmatic commitment of true believers and are highly prone to moralistic rhetoric. They demand, among other things, "moral clarity" in dealing with regimes that stand in the way of America's universal purpose. They see themselves as champions of "virtue." (p. 384).

Thus, according to Ryn, neoconservatism is analogous to Bolshevism: in the same way that the Bolsheviks wanted to destroy established ways of life throughout the world to replace them with communism, the neoconservatives want to do the same, only imposing free-market capitalism and American-style liberal democracy instead of socialism.

Colonel Lawrence Wilkerson, former chief of staff to U.S. Secretary of State Colin Powell, had the following to say in a December, 2005 interview with the German weekly Der Spiegel:

"They are not new conservatives. They're Jacobins. Their predecessor is French Revolution leader Maximilien Robespierre."

Sheeple see... Sheeple do...
Or some terrorizing thought like that?

hi CM1! Racism is definitely on the move in this era, that many progressives refuse to see it wrt to immigration reform and other hot topic issues is a sad testament to the denial in place. Thx for this entry, we have to keep fighting for justice. paz

So many people are disconnected from reality I have come to the conclusion that I must be the one crazy. In this day and age to have anyone denied the right to sit under a tree because their skin tone is a few shades darker is something from a sick 1950's news story. To have it happen in the 21st century is insane.

And then there's the story of the black woman called the N-word and forced to eat feces.

I don't know if it's on the rise. I feel like racism exists under the surface and simply manifests itself in different ways and in different frequencies.

and now there are allegations (well they've been going on a while, only NOW are they coming to light) - the connecticut state police MAY be discriminating against a state trooper/pilot of color. again, only allegations, we don't know the whole story.

I have no doubt that it has always existed under the surface... But I also think that the political climate that these necons/Jacobins have created has enabled it to "come out" and grow, IMHO.