Which Presidential candidates do the military support?

You might be very surprised at the answers that Greg Sargent puts up at TPM Election Central:

This is interesting: A new study finds that contributions to Democrats from members of the U.S. military have shot up dramatically since the start of the Iraq war in 20003.

The study, by Capital Eye, which is a newsletter for the Center for Responsive Politics, finds that this year, 40% of military money has gone to the Democratic Party or Dem Presidential candidates, compared to only 23% in 2002, before the war started.

Even more interesting, it finds that of all the Presidential candidates, the one receiving the most military money right now is Barack Obama, who opposed the war from the beginning ...

Griggs, who voted for George H.W. Bush but not his son the current president, contributed to Obama 's presidential campaign this year, she said. Among the military forces, she's not alone in her support for the Democratic senator from Illinois, who has spoken out against the war since its start. Obama, who has never served in the military, has brought in more contributions from uniformed service members—about $27,000—than any other presidential hopeful, Democrat or Republican. "I feel that he's the most progressive candidate and he stands for change," Griggs said. "I believe he is that breath of fresh air that we need to get this country back on course."

Among GOP candidates, Ron Paul, the only Republican who opposes the war, has brought in the biggest haul from the military since the start of the 2008 election cycle in January—at least $19,250. 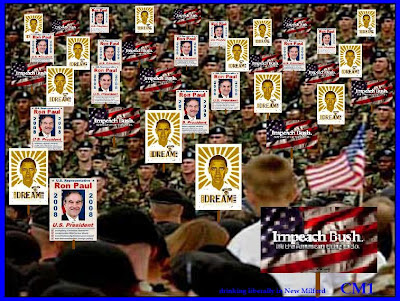