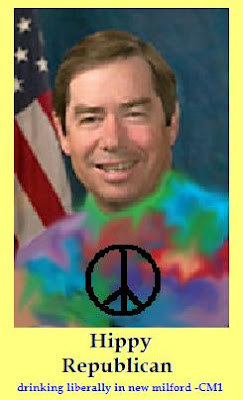 So sayeth the Democrat & Chronicle:

Just received an email from our Washington reporter, Erin Kelly, who just got off the phone with Rep. Jim Walsh. She's writing a story for tomorrow's paper that reports the moderate Republican is switching gears and is now calling for withdrawal of U.S. troops from Iraq.

Not only that but Walsh, who visited Iraq during the weekend, says he will no longer support funding the war.

Going from supporting the Iraq occupation to being willing to cut off the funding in order to end the disaster all in one recent visit?

Jim Walsh is obviously turning into nothing more than another dirty-hippy-peacenik republican that wants to embolden the enemy. The freakin' defeatist communist!

Either that or he might have actually have put down the right-wing crack pipe long enough to have taken the time to talk to the some of the soldiers on the ground.

Via the NY Times, more soldiers are calling out all those BS artists in DC again:

VIEWED from Iraq at the tail end of a 15-month deployment, the political debate in Washington is indeed surreal. Counterinsurgency is, by definition, a competition between insurgents and counterinsurgents for the control and support of a population. To believe that Americans, with an occupying force that long ago outlived its reluctant welcome, can win over a recalcitrant local population and win this counterinsurgency is far-fetched. As responsible infantrymen and noncommissioned officers with the 82nd Airborne Division soon heading back home, we are skeptical of recent press coverage portraying the conflict as increasingly manageable and feel it has neglected the mounting civil, political and social unrest we see every day. (Obviously, these are our personal views and should not be seen as official within our chain of command.)

The claim that we are increasingly in control of the battlefields in Iraq is an assessment arrived at through a flawed, American-centered framework. Yes, we are militarily superior, but our successes are offset by failures elsewhere. What soldiers call the “battle space” remains the same, with changes only at the margins. It is crowded with actors who do not fit neatly into boxes: Sunni extremists, Al Qaeda terrorists, Shiite militiamen, criminals and armed tribes. This situation is made more complex by the questionable loyalties and Janus-faced role of the Iraqi police and Iraqi Army, which have been trained and armed at United States taxpayers’ expense.

A few nights ago, for example, we witnessed the death of one American soldier and the critical wounding of two others when a lethal armor-piercing explosive was detonated between an Iraqi Army checkpoint and a police one. Local Iraqis readily testified to American investigators that Iraqi police and Army officers escorted the triggermen and helped plant the bomb. These civilians highlighted their own predicament: had they informed the Americans of the bomb before the incident, the Iraqi Army, the police or the local Shiite militia would have killed their families.

The letter was written by these active duty, serving in Iraq soldiers:

I encourage you to read the entire letter if you still don't get the point... Oh yeah, and our allies, the Brits, have had enough too:

The UK Indpendent reports that the British military command wants to get out of Iraq as soon as possible.

Senior military commanders have told the Government that Britain can achieve "nothing more" in south-east Iraq, and that the 5,500 British troops still deployed there should move towards withdrawal without further delay.

Last month Gordon Brown said after meeting George Bush at Camp David that the decision to hand over security in Basra province – the last of the four held by the British – "will be made on the military advice of our commanders on the ground". He added: "Whatever happens, we will make a full statement to Parliament when it returns [in October]."

Two generals told The Independent on Sunday last week that the military advice given to the Prime Minister was, "We've done what we can in the south [of Iraq]". Commanders want to hand over Basra Palace – where 500 British troops are subjected to up to 60 rocket and mortar strikes a day, and resupply convoys have been described as "nightly suicide missions" – by the end of August.

I have a bad feeling that the Brit's experience in the south of Iraq is a precursor for an even more dangerous and humiliating scenario for the American troops to their north.

The soldiers are telling you the truth, and meanwhile political hacks in Washington just don't get it, or refuse to accept the truth:

A soldier puts up a challenge to Congress and the pResident:

I challenge anybody in Congress to do my rotation. They don't have to do anything, just come hang out with me and go home at the times I go home. And come stay here fifteen months with me.

Veteran activist jimstaro at ePluribus Media Youtubed an ABC report covering this story I blogged about on Saturday:

YOU all say YOU support the troops. What a fucking load of crap. If YOU aren't there in Iraq along side them in this endless war that YOU support...

Don't ever fucking tell me YOU support the troops.

That goes for all of you war cheerleaders, Republican and Democratic party alike, that continue to fund this endless disaster. The same thing goes for all of you keyboard and armchair warriors that cheer on the occupation of Iraq but are too hypocritical to spill your own blood in Iraq's desert sands.

Via the NY Times:
More soldiers and their families are speaking up against the Iraq occupation.

sptmck at 1%More Conscious has 100% more well chosen words concerning the soldiers that are mad about the longer deployments and the others that no longer believe in the mission in Iraq.


And this ABC video aired later in response to the original report:

There were other soldiers telling you the truth at the same time as Vassell, last month:

When soldiers come right out and tell you shit like this it is a serious matter. They must have absolutely no confidence in their leadership or the mission they are being given if they are willing to risk the penalties of speaking out against their orders.

Beth Pyritz, an Army wife in Virginia,
has joined an antiwar group.

“I backed this war from the beginning, but I don’t think I can look my kids in the eyes anymore, if my husband comes home in a wooden box, and tell them he died for a good reason.”

Military Families Speak Out, one such group, which was started in the fall of 2002, now has about 3,500 member families. About 500 of them have joined since January.

Nancy Lessin, a founder of the group, said it was noteworthy that about a hundred military wives living on bases had joined in the last three months. Wives living on bases, she said, are more reluctant than parents of soldiers to speak out.

For Beth Pyritz, 27, who recently joined the group, the turning point came last month when her husband, an Army specialist, left for Iraq for his third deployment.

So it seems that it is going to be up to Congress to actually support the troops by ending the bushies' authorization to wage endless wars. bush won't do it. He never has supported the troops. It remains to be seen if Congress can finally do the right thing here.

Congress is on vacation now, and has yet to do the right thing when it comes to Iraq...

If you are in the minority party of warmongers and are about to try and spin the Iraq occupation with a fake Petraeus report in September, written by the White House, STOP... STOP THE FUCKING BULLSHIT NOW! We The Majority of The American People already don't fucking believe a word you say anymore. And neither do the soldiers. And if you are in the majority party in Congress, STOP PLAYING POLITICS AND START ENDING THE OCCUPATION NOW!

If you haven't got the leadership skills needed to end the occupation now, while you control both the Senate and the House in Congress, than why the hell would we ever give any of you the keys to the White House?

Walsh must be just as evil as all of those dirty-hippy-peaceniks in the military that think the occupation of Iraq is anything less than the path to bush martyrdom.
Brewed by Connecticut Man1 at 9/10/2007 11:53:00 PM