It seems like HatCity Blog's campaign to reign in the hate filled speech of the Big Turd and his insane clown posse of xenophobes on Comcast cable is showing some positive effects:

For those who don't know, Tom Bennett is a host of one of the most disgusting shows on Comcast local public access, The BigT's Talk and Variety show. The show is a favorite among the lowest of our community in Danbury: hate-mongers, xenophobes and several elected officials who are choose to express their bigotry in private.

For some time, Bennett and co-hosts John McGowan (Vice President of Elise Marciano's local anti-immigration group) and a coward, who too afraid to rant in front of the camera, that goes by the name "Bones", have repeatedly violated the rules and regulations set forth by Comcast. Using profanity, highly sexual explicit language, and racial slurs, Bennett uses his show as an outlet to promote hate-speech and bigotry against immigrants, minorities, and homosexuals.

Most recently, besides issuing a slew of racial slurs and threats against yours truly, in what could quite possibly be a criminal act, Bennett and his co-hosts repeatedly called upon residents in Danbury to go out into the streets and to assassinate members of the immigrant community.

As outrage over Bennett's hate-filled behavior mounted, we here at HatCityBLOG and as well as members of the YouTube community who know of Bennett from his online videos, led the way in requesting Comcast to take action against Bennett's outlandish behavior and terminate his contract. Letters and calls flowed into Comcast public access coordinator Dave King's office and most recently, I made an appeal to the members of the cable advisory board to also take action and terminate Bennett's contract.

It seems like Comcast is beginning to get the message that the disgusting behavior from Bennett, McGowan, and "Bones" will not be tolerated. 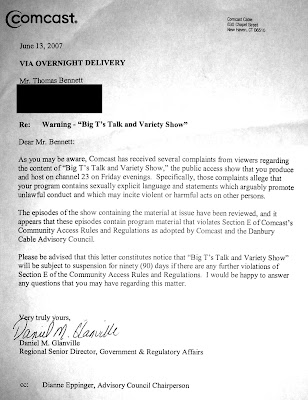 View letter here.
After presenting my evidence of Bennett's outrageous behavior to the cable advisory board, the members of the committee ruled to label Bennett's show as an "adult program" and advised the member representing Comcast to move the show from it's current slot of 9-10 P.M. to 10-11 P.M. This is rather significant because since the employees of Comcast leave the building at 10 P.M., it would require Bennett to tape his program thus forcing him to change the format of his show, which in it's current state is a live program.

Does this mean we're going to stop in our demand that Bennett be removed from the airwaves? To put it simple...HELL NO! In fact, light of the recent events, and legal advice, we're going to continue to take the necessary steps top make sure that Bennett, McGowan, and "Bones" are held accountable for their language, disgusting behavior, and calls for violence.

Bumping these idiots to a later time slot is a pretty big move by Comcast, and as their letter states... Any further violations of Comcast's "Section E" rules and the show "will be subject to 90 days suspension."

We will all be paying attention to this matter.

Kudos to ctblogger, and the HatCity Blog readers, for fighting the good fight and getting Comcast to do something about this!

Really, it's sad that we have people like that in this country...

I am a huge proponent of Freedom of Speech... But there is a bigger problem when hate filled speech inciting violence and sexually explicit speech like that is prime time in a public forum.

This is a huge step by Comcast IMHO. And, given that idiots track record, this likely won't be Comcast's last action.