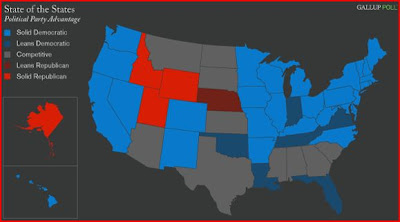 Gallup has the longer explanation of this map. Red no more has the shorter one:

you could call this "What will a 50-state strategy buy?"

Utah, Idaho, Wyoming, Alaska and Nebraska. That's it. And even Nebraska gave one of its electoral votes to Barack Obama.

According to the Gallup poll out today, only these 5 states have a statistically significant majority who self-identify as Republicans. Stunning, just stunning. As a former Republican myself, I could certainly see this coming as every rational, intelligent and moral person was pretty much driven screaming from the party.

Ten more states are toss-ups. So much for the permanent Republican majority, I guess!

All told, 29 states and the District of Columbia had Democratic party affiliation advantages of 10 points or greater last year. This includes all of the states in the Northeast, and all but Indiana in the Great Lakes region. There are even several Southern states in this grouping, including Arkansas, North Carolina, and Kentucky.

What does that leave our Republican friends?

In contrast, only five states had solid or leaning Republican orientations in 2008, with Utah, Wyoming, Idaho, and Alaska in the former group, and Nebraska in the latter.

And remember that the political landscape is still shifting further and further left.

and the way the republicans are playing right now and gushing all over Rush --- those 10 tossups (including Kentucky) might shift even further...

and they can have Utah

A lot will depend on economic results. But the grandstanding by the GOP at a time when there is real work to be done isn't helping their cause much.