Poll out of Iraq & The GOP's Failure 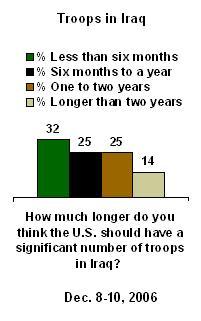 57%
of Americans
don't even want to wait as long
as the Iraq Study Group proposes.
Fifty-three percent of Americans think the Iraq war was a mistake. Is anyone surprised that bush has put off any decisions about what to do next when the incompetent one's support has just dropped to an all-time low:

"Just 21 percent approve of President Bush's handling of the war, the lowest number he's ever received, and an 8-point drop from just a month ago. Most of that drop has been among Republicans and conservatives."

Yep! even his base is rejecting his politics.

I don't think it's sinking in enough with the Beltway pundits, how large a victory the Democrats have achieved. So, here's a fact that everyone should know, use, spread, and just generally internalize:

The Democrats have more seats in the House right now than the GOP has had since the "do-nothing" Congress of 1947-1948, more than at any point in the Gingrich years that are seen as such a dominant GOP era.

Now, the numbers ... the Democrats, after Ciro's surprise thumpin' of Bonilla last night, now have 233 seats in the House. After the 1994 election, the GOP had 230, which drifted down before rebounding some in the last couple years and peaking after the Texas redistricting in the 232 they had last Congress. But the Democrats overcame all that redistricting shenanigans to post a larger majority than the Republicans had during all that time of the "Republican Revolution."

The great conservative experiment called the Republican Revolution failed miserably. We all have to be vigilant in ensuring that the Democratic party does not fall into the traps and temptations that spurred on the GOP's miserable demise. A demise that they show no signs of recovering from anytime soon.

We need to drive on pushing harder for the Progressive agenda that has transformed American politics in this Liberal Evolution.