NO GLITCHES in ConnPost Article

At MLN they have this up on the front page:

CTVotersCount.org: "Not So Fast, Please"

A ConnPost article gives a broad brush feel good assessment of the election. We are not ready to agree that everything went fine. We have no reason to doubt that the results were accurate enough that the voters' intent was realized in the results, however, we will wait for the results of the post-election audit and other analysis. Unfortunately, unless this audit goes much differently than the last three we will still be left with a level of uncertainty.

We also have some comments on the details in the article.

Some individuals filled in circles for Jim Himes on both parties.

"Those votes counted and would register under the Working Families party for qualification purposes.," said Bysiewicz. She said the machines would not reject those votes unless the ballot was filled out incorrectly elsewhere.

There must be some confusion on the part of the Secretary of the State or the ConnPost:

Fact: For voters that fill in bubbles for a cross endorsed candidate twice, they should be counted by the machine as Himes Unk (Unknown). When only one bubble is filled in then they would be counted for Himes Dem or Himes Wkf etc.

So unless the particular machine was programmed incorrectly, the article is incorrect. 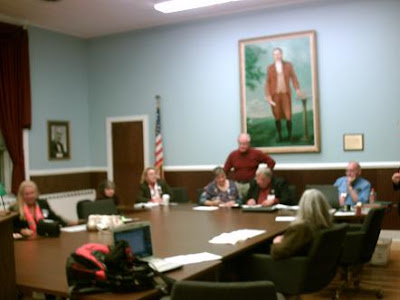 A couple of machines failed early on in Gaylordsville and at the Hill and Plain polling station. They switched them out and things rolled smoothly after that.

Murphy and Obama won. Appropriate NOs and YESs are winning. And Himes won too!

There has been some minor issues with people voting for candidates on their regular party line AND on the WFP line. The votes are, apparently, counted only once for the candidate BUT the vote is given to the WFP. (or something like that?) The software glitches on...

The ConnPost has it right. The votes were being given to the WFP if the voter filled in both lines for Murphy here. And the machines did not catch it.
Brewed by Connecticut Man1 at 11/06/2008 05:33:00 PM

Hey CT Man, what do you mean by "the machines did not catch it" -- that they didn't automatically add the UNK votes to WFP? I think that's normal.

I am not positive on this, but I think the gist of it was that the machines were not catching the overvotes (doublevotes?) for Murphy (the software glitch) and that 1) they had to adjust the vote count for it and 2) they had direction from Bysiewicz to give the vote to the WFP if there was a vote for the candidate on both lines.

I plan to go to the town clerk's office to clear it up tomorrow morning. I want to be sure about what they were discussing.

I went there to observe and they were quite open about it all. Though, they did squirm a little when they heard the name of my Blog and when I mentioned MLN, as well. heh

Aha, this is the second time i've worked on a race with cross-endorsements in CT -- what the machines do is report the votes for each candidate and line separately:

The "UNK" votes are Murphy's double-votes, where someone filled in two bubbles for the same cross-endorsed candidate but no bubbles for any other candidate in that race.

Also, if you're friendly with your registrars, you can ask them to check out something like this that's a particular concern to you before they make their test decks (about 2 weeks before the election) so they can test that the vote will be counted correctly.