Will Clinton Be Third Wheel in Iowa?

Hillary Clinton's campaign may be bracing for this possibility: 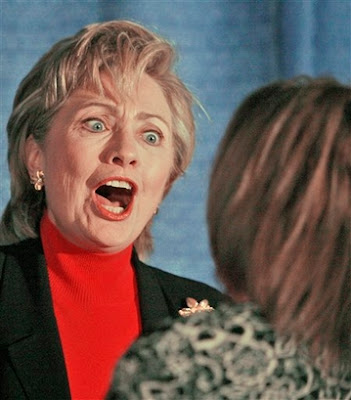 As the presidential candidates engage in furious pre-caucus spin, one of Sen. Hillary Clinton's most prominent Iowa supporters said Wednesday that she's already accomplished what she needs to in Iowa and can declare success even if she finishes in third place.

Former Iowa Gov. Tom Vilsack told ABC News that Clinton has shown that she can appeal to a wide swath of Democrats, which is what she came to Iowa to do.

Sure... We are certain she was planning on this all along.

With Dennis Kucinich recently giving a codified endorsement to Barak Obama and Ralph Nader giving an endorsement to John Edwards - and depending on whether or not you give those endorsements any credibility - there is a possibility of Obama and Edwards getting a little more traction from the left.

I view this more as the reality that while the media had pre-ordained Queen Con as the Democratic party front runner from the get go, the people that actually vote in this - the democratic party members - have never bought the media propaganda and think of Hillary Clinton as something between a moderate conservative and a full blown Joe Neocon Lieberman wingnut Republican. Her biggest problem? She did very little to dispel that perception of herself both before and during the primary campaign. In fact, she seemed to try and re-enforce that perception with some of the idiotic votes, positions and statements.