This cracks me up:

Bush’s job approval numbers may be mired in the low 30s right now, but U.S. News’ Washington Whispers reports that Bush aides predict he’ll be at 45 percent when he leaves office: 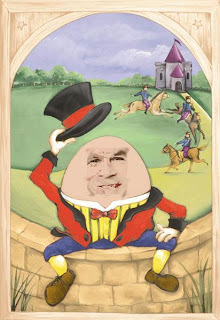 He’s a poll cellar-dweller whom even GOP presidential candidates sneer at, but George W. Bush and some congressional backers see happy days for the prez this year. His fans have dubbed it his “legacy year,” when they hope to lock in his achievements on the domestic front.

Among the items Bush’s GOP congressional allies want to work on this month: continuing his tax cuts and extending the controversial No Child Left Behind Act. As for the war, they say, the news has been good, and Bushies believe that their guy will eventually get credit for opening the war on terrorism. But more immediately, they are predicting a remarkable poll shift to about 45 percent favorable by the time he leaves office next year.

While the White House sees “happy days” here again for Bush’s “legacy year,” the American public appears quite ready for his presidency to be over.

And just how do they plan to put Humpty Dumpty's legacy back together? Through basic grammar, of course!

“I ain’t got it yet,” Bush said as Abu Mazen stopped speaking and an aide got on stage to fix the problem - which looked like it might have been an unplugged chord.