ctblogger over at HatCityBLOG caught CT-05 Representative Chris Murphy boldly saying what few Connecticut Democratic party politicians have had the courage to say: 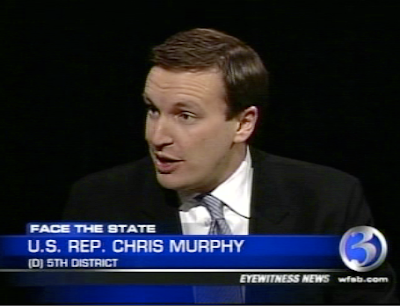 Back from campaigning for Chris Dodd in Iowa, Congressman Chris Murphy made an appearance on WFSB's "Face the State" and offered his views on our junior senator's endorsement of John McCain.

HOUSE: When Joe Lieberman was elected to the senate last year in 2006 he said he was going to work hard to get a Democrat back into the White House, yet he has endorsed Republican John McCain. How do you feel about that.

We all understood when Senator Lieberman got re-elected that he was going to be a different voice than he was previously, but a lot of us that think this country has to take a different direction were disappointed with his choice.

HOUSE: Should he leave the party or has he already left you think?

MURPHY: Well I think it's hard to justify that Senator Lieberman is a member of the Democratic Party any longer.

All I can wonder is how it has taken so long for CT Dems to come out and say what we, in Connecticut's left Blogosphere, have known for a long time? Well... At least Joe neocon Lieberman has finally and definitively outed himself as the elephant in the room and some Dems are taking note.

If Democratic politicians repeat this fact in the news enough the media may finally notice that Lieberman has officially taken the red walk of shame and they might stop mislabeling him as some sort of centrist or as being bipartisan. Harry Reid might even take note of this fact and do something about it!

You can catch the video of the interview over at HatCityBlog where Murphy also discusses the republican party's efforts to obstruct any movement on immigration issues in the hopes of using it as a wedge issue in the 2008 election cycle - something we have noticed on a local level - and few other issues as well.
Brewed by Connecticut Man1 at 1/07/2008 11:33:00 AM