No... This is not your typical republican type outing that you have had to explain to your kids over and over again the last few years. Last Tuesday I passed along a News Corpse story on Keith Olbermann's Sunday night pre-football game broadcast:

A resounding success for Keith Olbermann and the Countdown crew according to News Corpse:

Last night’s broadcast of Countdown on the mothership, NBC, was a major coup for Keith Olbermann and his MSNBC program. 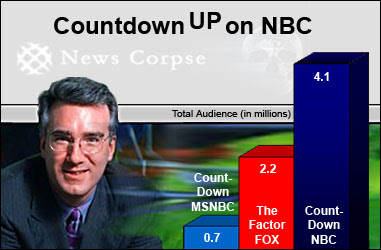 For all the clamoring for attention that goes on amongst the cable news kiddies, they are all fighting for slices of a relatively small pie. The ratings leader, Bill O’Reilly, averages about 2 million viewers a day. The lowest rated network news program (CBS) pulls in over 6 million. So graduating to the network opens millions of doors to a cablecaster.

Olbermann, not surprisingly, benefited from this. The early results show him with 4.1 million viewers. That only earned him a third place finish, behind “60 Minutes” and “America’s Funniest Videos,” but it was good enough to quadruple his average MSNBC audience. What’s more, (and this has to hurt) it is twice what Bill O’Reilly does on an average night.

Lies about Countdown are most assuredly forthcoming from Rupert Murdoch's Republican stooge, O'Liely, any minute now... You can read more at News Corpse about why there is still room for growth in those numbers for KO and Countdown.

This is a good showing for a brand new entry in the time slot. I suspect that the football game shown afterwards may have helped his numbers a little with people tuning in expecting a pre-game show, or just not wanting to miss kick off. I wonder how his numbers compared to the game's numbers?

The key here is to see if he can replicate (or increase) those numbers when he gets slots like that again. Another good measure of how well he did might be if there is a spike, even a little one, on his regular 8 pm (EST) and midnight slots. That might be some of those NBC viewers going out of their way to find his show on MSNBC. I hope that does happen... One of his Special Comments on a prime time network would probably shake a few viewers out of their seats.

This week News Corpse comes back with numbers showing that the NBC broadcast was a resounding success and it showed in Countdown's recent ratings numbers on MSNBC:

On August 26, 2007, Keith Olbermann's Countdown was broadcast on NBC. Despite a scattered schedule wherein the program was delayed or preempted in many markets, it performed respectably, delivering 4.1 million viewers. But what I was waiting for, was to see if there would be any afterglow that reflected on his MSNBC airing. There was: 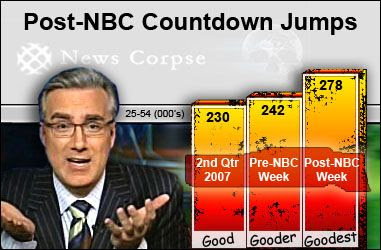 For the week ending August 31, Countdown averaged 278,000 viewers in the key 25-54 demo. That's a 17% increase over the program average for the 2nd quarter of 2007. It is fair to conclude that this spike was due almost entirely to the promotional value of the NBC broadcast. None of the other programs on MSNBC's schedule enjoyed a comparable bounce. Olbermann's numbers exceeded his 2nd quarter average (230K) as well as his prior week average (242K).

Read more on how these numbers compare to a certain regular nominee for the "Worst Person in the World!" and how this reflects not just on Keith Olbermann and the Countdown crew but, also, on "mainstream progressive news that is factual and compelling."

If you haven't seen Countdown before, here is a clip of Keith Olbermann's most recent Special Comment. These Special Comment editorials have become a fan favorite and hallmark of the show:


"Just over 500 days remain in this Presidency.

Consider the dead who have piled up on the battlefield.... in these last 500 days.

Consider how this President has torn away at the fabric of this nation in a manner of which terrorists can only dream... in these last 500 days.

And consider again how this President has spoken to that biographer: that he is "playing for October-November"… the goal in Iraq is "To get us in a position where the presidential candidates will be comfortable about sustaining a presence"… and consider how this revelation contradicts every other rationale he has offered... in these last 500 days.

In the context of all that… now, consider… these next 500 days.

Mr. Bush, our presence in Iraq must end.

Even if it means your resignation.

Even if it means your impeachment.

Even if it means a different Republican to serve out your term.

Even if it means a Democratic Congress -- and those true Patriots among the Republicans -- standing up and denying you another **penny** for Iraq, other than for the safety and the safe conduct home of our troops.

This country cannot run the risk of what you can still do to this country... in the next 500 days…

Not while you, Sir... are playing.