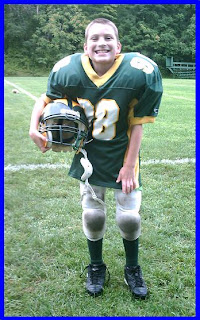 the Wranglers corraled Danbury, 19-0, and the Longhorns gored Plainville, 19-13.

The Wranglers' Mighty Mite 'W' over Danbury's Vikings was built on an edge in total offense of 217 to 27 yards.

A defense which limited Danbury to a single first down was sparked by Caleb Anderson, Isaiah Jenkins, Will Roode and Andre Taylor, who chalked up an interception.

Those players found plenty of holes in the Danbury 'D' thanks to the blocking efforts of Steve Herron, Tommy Gavel, Alex Davlos and Mike Simao.(edited for spelling and other- CM1)

Yeah... I'm proud of Connecticut Kid2. :) He is one of the smallest players and he isn't going to be the star player on any football team, but he is having fun and learning. All of the kids and the coaches on the team have worked hard the last few weeks and they played the entire game as a team.
Brewed by Connecticut Man1 at 9/07/2007 08:04:00 PM

good job, CTKid2!! AND it sounds like he's having fun, which makes it all the better!

that's a great photo.. what a fantastic smile

That is one of his big cheesy smiles. If you click on it you can see he is half making a face.

don't tell him (connecticutkid2)i said this, but he is adorable!

He normally doesn't read the Blog but I may have to point him to the comments just to make him blush! :)