Vitter changes his diaper and gets back to work 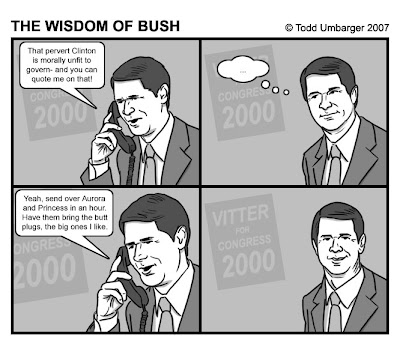 Cartoon with permission from Todd Umbarger*
Via NOLA.com, David Vitter has a fresh diaper on and is set to return to work on his campaign for family values:

After remaining in seclusion since his telephone number turned up last week in the records of an escort service in Washington, D.C., Senator David Vitter will make a public statement this afternoon at the Sheraton Galleria in Metairie.

Vitter has not responded to allegations which resurfaced last week that he was a regular customer of a prostitute who went by the name of Wendy Cortez when he was a state representative in the late 1990s. He has previously denied that allegation.

He also did not respond to claims by a local madam that he had been a customer at her Mid-City brothel around the same time.

*ed. note: I have received permission to use cartoons from former New Milford, CT native and artist Todd Umbarger. I hope to find many uses for his talent and humor in the future. Many of you may be familiar with his work from Bob Geiger's Saturday cartoon roundups feature that is linked off of Crooks and Liars almost every weekend.