Eric Cantor: "Dem Thugs Did This To Me!"


It's clear from the Richmond police statement that Cantor's office was not directly targeted. Rather, an office that he has used in the past (but not his main campaign office) was randomly struck by a bullet that had been fired into the sky.


I'm not minimizing the dangers of randomly shooting bullets into the air, but for Eric Cantor to describe this as an attack targeting his campaign office is supremely dishonest, an obvious attempt to deflect attention from Republican Party's violent and extreme rhetoric in recent days. 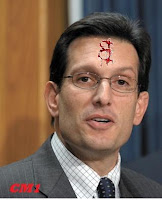 Next thing you know, Cantor will be claiming a backwards B was carved in his face.

"Dem Thugs Did This To Me!"