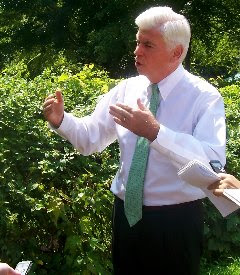 I will have an interview with Senator Dodd coming up soon, as well as a little over an hour of footage from a meeting in Hartford between Dodd, Sebelius, DeLauro and some small business advocates that I was at today. Thank you kindly to the Connecticut State Democratic party workers that snuck me in there - it was closed to the public - and to Senator Dodd for giving me the time to take some shaky and slightly comical footage. :) (Note to my amateur self... Next time, open the lens protector for the camera BEFORE starting an interview)

Sadly, and though she had said she would give me few moments, I missed out on putting some questions to Rep. Rosa DeLauro because she had to go while I was interviewing Dodd.

I think you'll find the questions I put to him pretty good. The kind of of questions he probably does not typically get from others out there.

Final notes: I was even asked for a statement from a Tea Party representative there. I'll see if I can find the message on the net (might be at the Dump Dodd site?) since after making the statement in conversation he asked me to record it for him. Not sure if he agreed OR not... But he said he would put it out there unedited. We'll see.

As well, a FOX news correspondent, Shelly Sindland, took some information from me after my interview with Senator Dodd. She said she would try to send me some pics that she had (Ed. Note: updated with a photo and attribution link now), as well. And I bumped into Ken Kreyeske there, covering the event either for his Blog or a paper. I did not get much of chance to say more than hello and shake his hand.
Brewed by Connecticut Man1 at 8/03/2009 01:37:00 PM

I liked blog its nice article keep it up!

I recently came accross your blog and have been reading along. I thought I would leave my first comment. I dont know what to say except that I have enjoyed reading. Nice blog. I will keep visiting this blog very often.

I really like it great article thanks for sharing