Bush No Longer Has Diplomatic Immunity

That is a fact. Now, you may ask "why is this important?"

Leading up to a 2004 visit to Vancouver, Canada, lawyers there sought to have him charged for his criminal behavior resulting in a court decision that reflected the Canadian Attorney General's view that Bush could not be charged for torture at that time because he had diplomatic immunity:

“These charges were properly laid and backed up by powerful evidence. The government didn’t deny that evidence because it couldn’t deny it. Diplomatic immunity is purely procedural. It doesn’t affect the validity of the charges, only whether they can be proceeded with, for the time being, in a foreign court, in this case a Canadian court. Even if Bush has immunity, it’s only temporary and it won’t shield him or anyone in his administration from Canadian law, or any other law, when they leave office. That the Canadian government would try to hush this up by hiding Bush behind diplomatic immunity was only to be expected. Paul Martin invited Bush here to ingratiate himself with the President, despite the President’s crimes against our laws and against international law, despite even his inadmissibility as a war criminal under Canada’s immigration laws – above all, despite the unending human disaster the President’s ‘war of choice’ has brought to the people of Iraq.”

Cut back to 2009, as Bush makes plans to deliver a speech in Calgary, Canada, and this time? Bush no longer enjoys the diplomatic immunity that his status as a politician provided back then:

Bush is scheduled to speak in Calgary March 17, but Vancouver lawyer Gail Davidson says that because Bush has been “credibly accused” of supporting torture in Iraq and Guantanamo Bay, Cuba, Canada has a legal obligation to deny him entry under Canada’s Immigration and Refugee Protection Act. The law says foreign nationals who have committed war crimes or crimes against humanity, including torture, are “inadmissible” to Canada. ”The test isn’t whether the person’s been convicted, but whether there’s reasonable grounds to think that they have been involved,” says Davidson, who’s with Lawyers Against the War (LAW). “…It’s now a matter of public record that Bush was in charge of setting up a regime of torture that spanned several parts of the globe and resulted in horrendous injuries and even death. Canada has a duty.”

Canadian Prime Minister Stephen Harper and the Canadian Border Services Agency aren't talking, as of yet, as to what they will do, if anything, should Bush bother to make it to the Canadian border.

This news comes on the heels of the UN announcing that they are going to pursue an investigation of torture and rendition policies:

Hasn't happened here in the USA because our politicians are too afraid of what they would find out about themselves.

We all know pretty much everything on the torture story and there is too much evidence to ignore, yet there are still no real investigations, prosecutors and all, in the USA that we know of.

If you hear anything about this visit to Canada being abruptly canceled... Then you might already know the reason why.

As for the leadoff homeless kids story in that video?

In and out of classrooms, sleeping in shelters, shielded by parents, homeless children can seem invisible to society at large.

A national study released Monday finds that one in 50 children in America is homeless. They're sharing housing because of economic hardship, living in motels, cars, abandoned buildings, parks, camping grounds or shelters, or waiting for foster care placement.

Districts across U.S. struggling to pay for needs of uprooted kids

Many of us in the Blogosphere knew that it was on the verge of becoming epidemic as a series of diaries written by teachers started appearing at many Blogs concerning these kind of issues as as far back as December:

Soooo, I was just doing my regular job, today. That's where things fell apart thanks to the real pain of our Main Street meltdown hitting real children.

For my 8th graders, some of my kids didn't get an 80% (mastery) on the Forms of Government test. As per my usual routine, I gave up my lunch and offered a LUNCH BUNCH study time and test re-take opportunity. One student arrived early sans lunch. I was busy gathering up lab equipment off tables from my 7th grade science class, so I wasn't looking at my early student as I said, "Hey, go on and get your lunch. You can eat while we do our Rapid Study Technique before the re-take."

I could feel the silence and non-movement of my student. So, I turned and looked. There were tears on the table beneath his bowed head. I pulled up a chair and asked, "Family or friends." Silence. That meant it was a family issue. Probing gently, I got, "Mrs K., both my Mom and Dad got laid off and our house ... our house. I was too worried to ask for a check for lunch money, and I'm too embarrassed to ask for the P&J lunch." When he said "our house," it came out like a moan.

For a while... Our kids were living this nightmare. It is breaking my heart to know that some kids may not be as lucky as ours were and could end up in shelters, moving in with relatives or, even worse, living in Bushvilles - the tent cities that have popped up across the nation as more and more Americans become homeless. 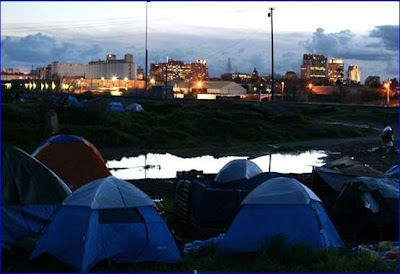 Ahh, but he'll just declare himself Viceroy of Canada and regain his diplomatic immunity.

You may be joking there, but the bush-mini-me, Canadian P.M Stephen Harper, is crazy enough to try and force something like that on Canadians.

P.C. are still in a minority. It's an interesting challenge to authority he's desperately trying to assert.
Take a look at what one of my more colourful acquaintances posted
http://clapso.wordpress.com/2009/03/13/off-the-pigs-answer-under-police-assault-again-take-action/

I have been kind of following the near self-destruction of the Harper minority government. I will read that link shortly, opit.

Bush had better hope he has some competent handlers because we all know he is too stupid to pay any attention to something like that.
The Bubble is strong around that one.

Hey, even Rumsfield figured that one out and beat feet out of France when there were rumblings of arresting his ass.

The thing to remember is that the most likely thing to happen is that they will refuse bush entry into Canada.