Anyone that thinks this is going to win over former Hillary Clinton supporters already firmly in the Democratic party fold don't understand the fact that Hillary supporters were and are strongly Pro-Choice for the most part.

Her lifetime membership in the NRA may help solidify one of McCain's many weaknesses in his own party base, as well as her advocating religion in schools under the banner of "creationism" may help solidify some of the Christian fundies, but I fail to see how any of it will get her anywhere with moderates or women, in general. Some of the Christian fundamentalists may even despise her just for the fact that she is woman seeking power.

As for her supposed record of cleaning up Alaskan politics and conservative cred?

Well? Palin did smoke pot and, yes, she did inhale:

Palin said she has smoked marijuana -- remember, it was legal under state law, she said, even if illegal under U.S. law -- but says she didn't like it and doesn't smoke it now.

Breaks laws but says it is OK... Sounds bush-like. IOKIYAR, to say the least.

Palin gave up on the Alaskan bridge to nowhere when it became a hot button showcase issue for Senator Steven's wasting tax dollars.

The $398 million bridge would have connected Ketchikan, on one island in southeastern Alaska, to its airport on another nearby island.

"We will continue to look for options for Ketchikan to allow better access to the island," the Republican governor said. "The concentration is not going to be on a $400 million bridge."

And any doubt about her place on the ticket to distract from corrupt Republicans can be removed here: 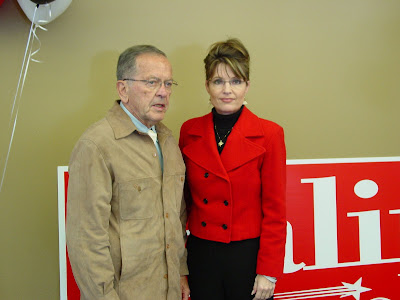 Yep... She has an image as some kind of political reformer but she is just another booster of the Corrupt Bastards Club. Obviously the feelings are mutual:

I bet Governor Palin wishes she could take this commercial back.

And she is running from possible impeachment in her state too:

Palin, who has previously said her administration didn't exert pressure to get rid of trooper Mike Wooten, also disclosed that members of her staff had made about two dozen contacts with public safety officials about the trooper.

"I do now have to tell Alaskans that such pressure could have been perceived to exist although I have only now become aware of it," Palin said.

But Palin said her decision to fire Public Safety Commissioner Walt Monegan last month had nothing to do with his refusal to dump trooper Mike Wooten.

The governor said evidence of what she called a "smoking gun" conversation, and other calls made by her aides, only recently surfaced as the attorney general started an inquiry at her request into the circumstances surrounding her firing of Monegan. Palin wanted the review because a special investigator hired by the Legislature is about to investigate the firing and a legislator has been quoted in a newspaper story talking about impeachment.

Got caught and threw others under the bus. Can you get any more bush than that? Yes she can... Here she tried to head off an investigation by having a farce inquiry of her own.

Gov. Sarah Palin is trying to find out what the Legislature's special investigator might discover as he probes her controversial firing of Public Safety Commissioner Walt Monegan.

Obviously Sarah Palin wants the inquiry for ethics reasons... Not to head off any damaging information that might come up in a real independent investigation.

Questions have been raised since Monegan's firing about whether Palin, her family, or members of her administration pressured Monegan to fire Wooten, a Mat-Su-based trooper involved in a rough divorce from the governor's sister.

Alaska political corruption probe refers to a widespread investigation from 2004 to the present by the Public Integrity Section of the U.S. Department of Justice, the Federal Bureau of Investigation, and Internal Revenue Service into political corruption of lawmakers in the Alaska State Legislature, focusing in particular on lawmakers' official actions in relation to the oil industry, fisheries, and private corrections industry. As of May 2007, the investigation has resulted in indictments against four current and former Alaska state legislators on corruption charges; and guilty pleas by two executives of the oilfield services company VECO Corporation to charges of bribery and conspiracy to impede the Internal Revenue Service. Indications are that further indictments may be forthcoming as the investigation progresses.

Former Representative Tom Anderson was indicted in December 2006 on allegations of extortion and bribery involving his support of a private corrections company. Anderson was convicted of all seven felony counts on July 9, 2007. Former House Speaker Pete Kott (R-Eagle River), former Representative Bruce Weyhrauch (R-Juneau), and current Representative Vic Kohring (R-Wasilla) were arrested and arraigned on May 4, 2007 on charges of accepting bribery and extortion related to their support of an oil tax law favored by the oilfield services company VECO Corporation.[1] On May 7, 2007, VECO Corporation founder and CEO Bill Allen and Vice President for Community & Government Affairs Rick Smith pleaded guilty in U.S. District Court in Anchorage to charges of bribery and conspiracy to impede the Internal Revenue Service.[2]

If you want to have a little fun...

Last November voters identified corruption as the number one issue affecting their vote, in short: vote the bastards out! We here at the C.B.C. couldn’t agree more but there are plenty more of these bastards out there in politics, the media and big business so let’s hear more about them. Play Who’s Your Corrupt Bastard? our award winning national contest ripped straight from the headlines of Alaska politics where you can win fabulous prizes and call out your favorite corrupt public figure. Peruse The Bastard Files for a look at current nominees. We are also the official headquarters for the now infamous Corrupt Bastard Club Gear - perfect for that corrupt bastard in your life.

Start To Spin Out of Control"

And there are also buzz type rumors that her last child (Trig) really isn't hers:

Palin is definitely a candidate with all kinds of failings so she fits in with the McCain campaign well.

Thanks for the link Sue. I hadn't seen that one, though I had seen it discussed in the comment sections of the Alaskan online news services and Blogs.

I mentioned it in my update, but I am not going to take it seriously until there are hard facts out there. "Smoke!>>>Fire?" I figure it will turn up soon enough if, as reported, the National Enquirer is digging. If there is one kind of story they know how to get... It is the sex scandals.