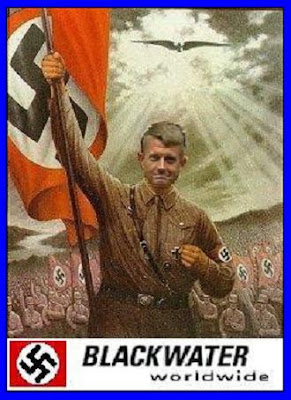 According to Think Progress:

Blackwater’s infamous logo — “a bear’s paw print in a red crosshairs, under lettering that looks to have been ripped from a fifth of Jim Beam” has “undergone a publicity-conscious, corporate scrubbing.” Branding experts say that the new look is “far less ‘kick your butt’ and much more ‘quarterly report.’”

Blackwater insists that it had been working on the redesign before the Sept. 16 shooting in Iraq that killed 17 civilians, but the new logo didn’t appear on the company’s website until afterward.

With recent allegations of Tax Fraud and Blackwaters futile attempts to deflect from the facts (Check the comments threads there), this re-branding effort will not help Blackwater much considering the other problems they have created by killing innocent Iraqis and stealing airplanes.

BAGHDAD, Sept. 19 — Iraq brought fresh criticisms of the private security company Blackwater USA on Wednesday, with Prime Minister Nuri Kamal al-Maliki saying that his government had registered a total of seven cases in which the company’s guards had killed Iraqis.

A lethal shooting on Sunday that involved an American diplomatic convoy and left at least eight Iraqis dead infuriated the Iraqi authorities and has prompted them to threaten to evict Blackwater, the company that provides security for the most senior American diplomats here. On Tuesday, the United States Embassy said all trips outside the Green Zone had been suspended.

As for the Blackwater stolen airplanes scandal:

The security contractor Blackwater USA has tried to take military aircraft out of Iraq and refused to give them back to the country.

Rep. Henry Waxman, chairman of the US House Oversight and Government Reform Committee, in a letter sent to Erik Prince, Blackwater's top executive, said he had learned that the firm tried to take at least two Iraqi military aircraft out of Iraq in 2005 and refused to give the planes back when Iraqi officials sought to reclaim them, according to the Associated Press.

In other Blackwater aviation news they are being sued for crashing a plane and killing some US soldiers, including one soldier from the Nutmeg state:

A three-judge panel says a lawsuit can proceed against the operator of a plane that crashed in Afghanistan in 2004 and killed three Army soldiers, including one from Connecticut.

The contractor operating the plane, Presidential Airways Inc., is the aviation subsidiary of N.C.-based Blackwater USA. It was based in Melbourne before moving to North Carolina.

Three Blackwater USA employees were also killed in the crash.

Presidential had argued in an appeal to the 11th U.S. Circuit Court of Appeals in Atlanta that the lawsuit should be thrown out, saying it was immune from prosecution because it was operating under a government contract.

The company also claimed that the lawsuit should not go forward because it would involve one branch of government reviewing another branch's decisions.

So much for their immunity in the US... At least in this case.

Of course, Blackwater is just the tip of the iceberg when it comes to corruption and contractors run amok in Iraq:

The scandal surrounding the conduct of Blackwater contractors in Iraq is just the most recent example of contractors and criminals run amok in that ill-conceived war. Since the occupation began, the U.S. military and its contractors have relied on shady characters and even criminals to do the outsourced business of supplying the troops, delivering weapons and making sure the mail arrives.

One such wanted criminal, Viktor Bout, was paid tens of millions of U.S. taxpayer dollars while illegally flying transport missions for the United States in Iraq. Bout is the notorious Russian weapons merchant whose fleet of aging Soviet aircraft rivals that of some NATO countries in its size and capacity. By marrying his access to Soviet bloc weapons with his airlift capacity, Bout established himself as the world's premiere purveyor of illicit weapons to the world's tyrants-- a one-stop shopping source for everyone from Charles Taylor and his armies of child soldiers of Sierra Leone and Liberia to the Taliban in Afghanistan, from Jonas Savimbi in Angola to the FARC rebels in Colombia.

Yet the flights in Iraq went on, at the request of Halliburton, KBR and others, on behalf of the U.S. Army, Air Force and Marine Corps, until early 2006. Farah and Braun, based on flight and refueling records from Iraq, estimate Bout's companies may have flown up to 1,000 flights as a secondary contractor for the U.S. government. Each flight cost about $60,000 -- not a bad chunk of taxpayer dollars. Bout managed to up his profit margin considerably by having his pilots apply for and receive special refueling cards that allowed them to gas up for free when they landed in Iraq.

Using an Amnesty International report as a starting point, the authors trace a deeply troubling incident that, based on a July GAO report, was not unique. The GAO report found that tens of thousands of weapons purchased by the U.S. military and destined for delivery in Iraq remain unaccounted for.

Needless to say, with the very real possibility that these goons from Blackwater may be pulled from Iraq, you can just imagine how they might be re-deployed... Just imagine these gun-toting mercenaries kicking in doors in your neighborhood in the "War on Drugs"?

The U.S. Defense Department has invited five contractors to bid on elements of a new multibillion-dollar effort to combat the global flow of illegal drugs allegedly used to finance terrorism.

Awarded by the Pentagon’s Counter-Narcoterrorism Technology Program Office (CNTPO), Dahlgren, Va., the contract vehicle has a potential value of $15 billion over five years. One participant is ARINC, a Maryland-based provider of airline communications systems.

“This gives us the opportunity to bid on this work,” said Linda Hartwig, an ARINC spokeswoman. “We don’t have a lot of details yet, but we do know that this is an expansion of what [the United States] is already doing to fight drug trafficking, and that 80 percent of the work will be overseas.”

Hartwig said the other participating vendors are defense giants Lockheed Martin, Northrop Grumman and Raytheon, and security contractor Blackwater USA. Blackwater confirmed its participation, but the other three vendors did not respond to inquiries.

Private armies, airplanes, missing weapons, drugs, bush family, and always Iran on the horizon... What more do you need to know? Read the fucking writing on the walls people.

These mercenaries are nothing but trouble, and don't be surprised when the next Iran-Contra affair goes viral on the Blogs and, afterwards (as per usual), in the news cycle if we keep going in this circular direction...
Brewed by Connecticut Man1 at 10/22/2007 06:30:00 PM

you know i didn't even realize those were crosshairs...

I had never seen their logo before the TP post.

I hadn't heard the story about them taking up the "War on Drugs" but not too long ago I did hear one Blackwater executive talk about how they were looking into the international peacekeeping mission and how they could do it easier than nation-states. These guys and their "business" have the hairs on the back of my neck standing straight up. Yeah, I think I see the writing on the wall myself.