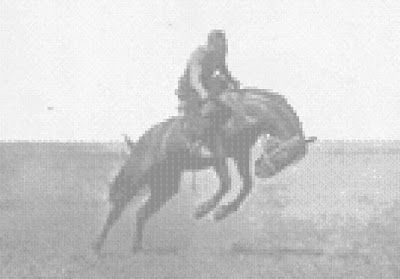 BooMan on the fools that think they can ride The Netroots Bronco:

Frontrunning candidates, the DCCC, prominent journalists, the congressional leadership...none of them know how to control the netroots. The netroots' demands are simple: stop this administration from committing crimes and get our troops out of Iraq. After that, it's all detail. With each capitulation, with each gloss-over and passing of the buck, the Establishment further alienates themselves from the citizen activists that do not need and will not be told what to do or think. We've educated ourselves and passed our verdict. Those that will not convict and sentence are just cogs in an appeasement machine that is chug-chug-chugging over a collective cliff.

There will no successful triangulation of the administration's war, or their crimes. The leader that plausibly makes the case that justice will be done is the candidate that will rise to the top.

If any of the candidates, or the leadership, or the media, thought or think that the Netroots' can be tamed through co-option, they must surely be disabused of that notion by now.

The people of this country...the people that are truly paying attention and participating in the blogosphere...demand justice and an end to this war. And that is not going to change.

You see, we don't give a hoot what the loonies running the assylum think. We have an agenda that is in direct conflict with theirs.

One of the comments summed up the big problem in the diary, and it is pretty plain when you talk to people outside of the Blogosphere about what is going on that the comment is 100% correct:

"The kicker is that the folks at the barber shop, the guys working on your car, most of the folks in the supermarket aisles know what's going on.

They may not read the blogs or read them much, but [their thoughts align] more with the nutso, "far left" bloggers than it does with the MSM on the war, terrorism and even civil liberties.

I wonder when the democratic candidates and their courtiers will figure that one out?"

Bob Higgins seems to think it is much worse than just the fight within the Democratic party for control of the Netroots:

My voice and the more powerful and eloquent voices of others with the same message might have been crickets chirping in the wilderness, they could not be heard above the howl of the bitter wind driven by the building stampede.

The great headlong rush was on. The Democrats looked like the riotous crowds of Pamplona in their frenzied dash for campaign funds, for their rightful share of the political plunder that had, for so long, been denied to them. Like the mobs of Pamplona except they were chasing after the bulls, racing madly down the streets of our capitol, through the storied halls of our public monuments, their larcenous rotting hearts exposed, their shameless, greedy, grasping palms outstretched, drooling mouths at the ready, eager to suck at the poisonous teats of public corruption and corporate largess, it was a sight from hell.

The relief of last November is now long forgotten amid in the fear and loathing of July, the wars continue unabated, the so called opposition party has joined in dividing the spoils and trampling the law, the hope is gone and, I belive, it is time for every American who cares for this country, for humankind to face up to the sickening and unavoidable reality of our times.

The government of the United States is thoroughly and completely corrupt. From top to bottom, from one side of the aisle to the other, at all levels, whether we look at the federal system or in our statehouses, our government, our institutions, our military, our courts and schools and regulatory bodies, each and every one, has fallen under the control of criminals. And they are being aided and abetted by the treacherous and treasonous majorities of both of our so called political parties.

We need not travel 12,000 miles and comb the dusty caverns of remote mountain ranges, or the empty blazing deserts of Arabia in a search for terror and evil. All the terror, all the fear, all the evil we could ever desire to discover is centered in the chambers of our government and commerce and the evil hearts and minds of those who control them.

The government of the United States now operates under the careful tutelage, direction and control of enormously powerful international corporate interests which have no respect for the people of this or any other nation, not their laws, not their values nor their common histories and least, their humanity, their very lives.

The only interest of these piratical, plutocratic vermin is to take the labor from our backs, to strip the fruit from our trees and the crops from our fields, to mine the ore and pump the oil from our earth, to discover a way to steal the water from our seas and the very light from our sky and make it their own, to control it all, to control it all in their thirst for profit, in their worship of Mammon, of Moloch.

Look not to the media, the self exalted press, those journalistic guardians of the past, have become the corporate stooges of the present, the once independent protectors of the people no longer exist, they were bought, bought and sold in the same trades as the judges, as the preachers, the pastors, bishops, and the healers, bought as cheaply as the public servants, their souls are owned by the houses of wealth and power. All the saviors have sold us out, there is no one to save us but ourselves.

Every day that the Democratic party continues to allow the criminal bush administration to destroy this country a bit more, chipping away at our rights, our Constitution, the very soul of this country, is another day that proves everything that Bob has written is true.

It is left to us, the people, the netroots, those with a conscience, and those of us that are real patriots, to defend this country from the glutenous appetites of those in power, the politicians and the business men feeding at the troughs of our government and on the lives of our children, that continue to ignore our pleas for political sanity and for real justice.

More and more, and every day, I am left with the feeling that We The People are the only ones that can stop this now, and it may take more than just withholding campaign contributions, and sending MORE Emails and letters, and standing with a sign on the street to do it.

For once, I hope I am wrong BUT I am am no longer waiting for the Democratic party to do the right thing here, and now. Constitutional crisis be damned! They have always had the power to stop the madness and have shied away from doing the right thing every single time they have have been given the chance to do so.

They are not innocent bystanders here:

All it would have taken was 40 Democrats with a conscience to do the right thing, and shut down Congress altogether. Before the 2006 elections, and after the 2006 elections. And they have not. But it sure was easy enough for them to find more than 40 Democratic party members to turn their backs on the people in the House when the FISA Bill came up...
Brewed by Connecticut Man1 at 8/06/2007 04:40:00 PM

That chump Reid made some comment last week that the Congress would not bow to pressure anymore from Bush and low and behold as I listen to NPR saturday morning and hear they bent over, parted their cheeks and took another one. I just don't know what to think anymore sometimes.

All I know is that it is at times like these that I am proud to be an indie with absolutely no party affiliation.