Even Republicans Love The Pork

Just a quick picture, from a Pew Research poll conducted from July 29 to August 1, of where the Republican party, the Tea Party and Sarah Palin have failed even more than Barack Obama in their messaging: 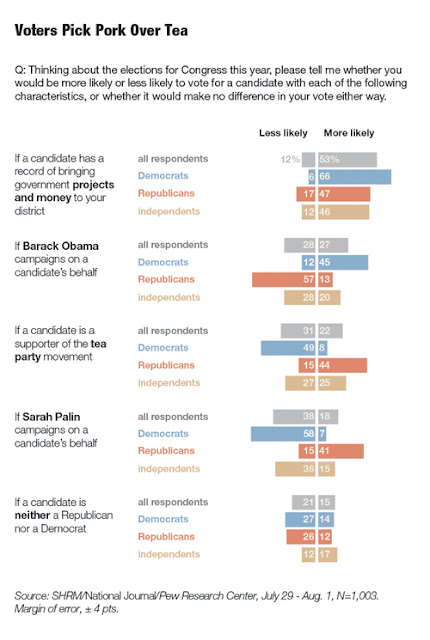 The sound you just heard in the back of your mind was an entire line of right wing gobbledygook talking points extremism thought being flushed down the toilet.

[update] Jed Lewison provides a little more insight in to how this really is more likely to play out in elections:

If you look at the net impact of each hypothetical on a liklihood of support (in other words, subtracting the less likely number from the more likely number), you get, in order:
So it turns out that the tea party's austerity message is a lead balloon for the GOP. Instead, voters want somebody representing them who will deliver the goods for their district. Even among Republicans, voters are just as likely to support a candidate who delivers government projects and money to their district as one who has the backing of the tea party.

Moreover, it turns out the election really isn't about any one national figure, but if it were, it would be Sarah Palin that was a detriment -- not President Obama.

[update deux] And, yes, no doubt that Pork has more political pull across the spectrum than Sarah Palin does. But none of this should come as a surprise given that we already knew that Socialism is as popular as the Tea Party. < smirk >
Brewed by Connecticut Man1 at 8/03/2010 01:01:00 PM

Cut the deficit - but just NIMBY.

NIMBY all the way.

Preview is my friend.

I don't see government projects necessarily as pork. Some, like public transportation, are highly valuable to society.

Some people would look at the public transportation stuff and call it pork too.