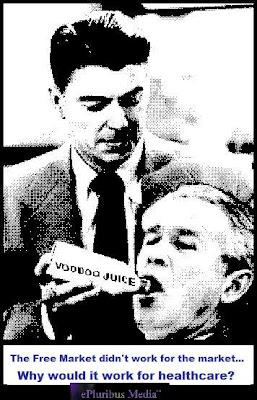 We know that the biggest reason you all are pissed about this is that your failed Reagonomic free-marketeers-run-amok ideas that caused the shadow bank meltdown and the economic mess we are in now have already been discredited to the point that nobody wants to hear them anymore. Don't tell me that your answer to healthcare is the free market.

You can not put a dollar value on life, and that is all your free market answers are about, aren't they?


a moral responsibility   those words are clearly applicable to the health care crisis  in this country.  Intellectually I knew that long before I first read (and wrote about) the Remote Area Medical Mission in Wise Virginia.  I lost any doubt during the weekend I spent there in July, which is why I am taking the first weekend in October to go to a similar event in Grundy, VA.

How do we compromise on morality?  IF we can make the case that what we are attempting do is a moral obligation, then I believe the politics will be on our side -  the conscious of most people can be challenged.  Clearly the late Senator Kennedy understood this, which is why the words of Matthew 25 were so prominent at his funeral.  For whatever human flaws he had (and acknowledged both in his letter to the Pope and in his soon to be published memoir). on this he did not lack moral clarity.

Part of the responsibility of those of us who speak out on issues is to remember our dual responsibility to afflict the comfortable as we comfort the afflicted.

Yes, in politics we must look at what is possible.  We must "advance the ball" down the field, since Americans are too fond of football metaphors.  But one should also remember that it matters not who gains the most yardage, only who scores the most points.   Thus speak not to me of points of agreement in negotiation if those do not lead to meaningful action in legislation that becomes law.

In moral tests one cannot be neutral.

Here is the real and honest moral argument:


So now we know who the real death panelists are!


After the mortgage business imploded last year, Wall Street investment banks began searching for another big idea to make money. They think they may have found one.

The bankers plan to buy “life settlements,” life insurance policies that ill and elderly people sell for cash — $400,000 for a $1 million policy, say, depending on the life expectancy of the insured person. Then they plan to “securitize” these policies, in Wall Street jargon, by packaging hundreds or thousands together into bonds. They will then resell those bonds to investors, like big pension funds, who will receive the payouts when people with the insurance die.

The earlier the policyholder dies, the bigger the return — though if people live longer than expected, investors could get poor returns or even lose money.

That is what happens when you put a dollar value on life. Investors would have twice the incentive to deny care to the elderly. What incentive would investors in healthcare insurance corporations have to keep them alive if they can make more money denying care to them and then, also, make more money on their investments in reverse mortgages?

Thanks for providing some illustrative coverage of this pressing national deceit.

If only every blog would start to yell "bloody murder!" about this new scam. Or is it just more of the same which we haven't understood until now?

Guess losing everything tends to concentrate the mind.

Investors would have twice the incentive to deny care to the elderly. What incentive would investors in healthcare insurance corporations have to keep them alive if they can make more money denying care to them and then, also, make more money on their investments in reverse mortgages?

War is a racket.

Apparently healthcare and mortgages are rackets and equally as deadly. :(

Piss Down Your Back and Tell You It's Economic Prosperity Reaganomics are the structural foundation for the Economic collapse. Add in the Republican push for profit over people (Bombs/Banking/Health NonCare) and Warfare Statism and you arrive at today...

The Health Care Reform is a very good move by Obama but I'm worried the Public Option bone is all we are going to get from him and he'll continue the Privatization of Profit and Socialization of Losses as well as the "necessary" daily sacrifices of soldiers for "American" Overseas Interests...