At the Bronx Zoo: The Animals are Getting the Pink Slip 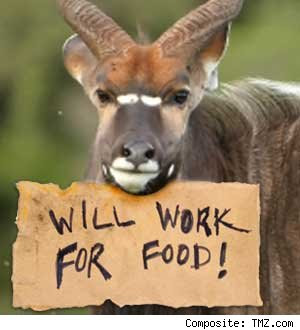 The Bronx Zoo is facing some serious cutbacks that could leave some endangered species looking for a new home:

What an example of skewed priorities. Mayor Bloomberg raised two taxes to ensure there will be 500 new cops on the streets of New York this year. There are 5.3 police officers for every 1,000 New Yorkers but there is only one World of Darkness and many of the inhabitants are endangered species. Thanks to Bloomberg's thirty-three percent cut in city funding to the zoo, children will no longer learn that "when the sun goes down most of the world's animals wake up."

Why does the zoo deserve special treatment in these harsh times? In a city that claims there is no money left for adequate mass transportation or even food stamps for that matter asking for special consideration for a living museum may seem unreasonable but the zoo preforms a far more important service than the storage of a few animals. They are devoted to educating generations that will understand why we should make our responsibility to endangered species a priority and work to protect wildlife.

A little action item for the Bronx Zoo:

A big reason New York is the number one city on the planet is its cultural institutions. Those institutions, including the Bronx Zoo and New York Aquarium, provide:

You were the difference in helping our institutions get their State funding restored-but we still need your help with City funding! This is a critical time to make your voice heard during the budget process.

If you go there they will help you write an email to Mayor Bloomberg and point you in the right direction to send it off...

If that doesn’t work, tell them to set priorities so the residents of the Big Cat House get hired on for foot patrol by the police force, and the inhabitants of the Monkey House are assigned as city council interns.

I don't mind the monkeys working for the city but I like to walk around in the city and I am not sure I want the big cats chasing me around?

Billions for greedy bankers and incompetent business types and hardly anything for what makes a society honorable and fair for those who have little.

Excuse the puddle of sarcasm on the floor for that last comment.

Some of my best childhood memories are of my visits to one of the world's great zoological parks, the San Diego Zoo.

With all the money government at all levels flushes down the toilet, surely adequate funding for something really useful like a zoo, can be found.

No matter where you live, right now, the zoos are probably starving for cash because of budget cuts.