I am a Pub-going, Loose and Forward Woman

A friend, rose is a rose, sent me this facebook group link and I had to ask her:

"What the heck is this about? I may be Pub-going, loose and forward but I am not a woman?"

Then she explained about it being against oppression and violence against woman. That is when the facebook group started to make sense...

Now, even the media is picking up the story:

India, as a nation, adores Valentine's Day. Indians embrace it as a holiday that goes beyond just being nice to your partner. Everyone – from the coffee guy to the gym receptionist who tried to hand me a red rose – was full of non-lecherous cheer. So I was shocked the next day to find the news awash with stories about far-right Hindu activists – from Shri Ram Sena to Bajrang Dal – who had beaten up unmarried couples and blackened their faces as a mark of shame for celebrating Valentine's Day. Their justification was that the day is a western practice, and promotes "lust not love".

This year, the same groups are out again in force. However, while the Indian government has been slow to act against these self-styled moral police, there's a keen sense that the winds of change are turning against these groups.

For a start, although it is a serious issue, it is hard not to laugh at the blustering of Pramod Mutalik, leader of Shri Ram Sena. Mutalik insists that his men will roam Bangalore armed with video cameras, capturing any unmarried couples found celebrating Valentine's Day and then force them to get married. In response, the brilliantly titled Consortium of Pub-going, Loose and Forward Women has started a campaign on Facebook – which now has a whopping 28,496 members and counting – that calls on people to send the Sri Ram Sena a pair of pink chaddis (meaning underwear in Hindi) on 14 February as a sign of protest.

But this is very clearly a story about violence and oppression of women, religion and freedom:

I'll give you Blue Gals words (and tip my hat to her for the video) to sum up the karmic beauty in this world:

A group of reasonably outraged Indians has started a movement to send pink panties (known as chaddis) (and oh how I love that) to the fundie organization. They have a blog and a lovely Facebook group with panties images I'm destined to steal. 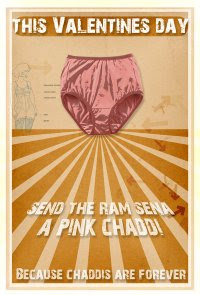 I also love that this horrible incident of violence against women can be met with direct action non-violence that gets lots of well-deserved attention. Fundies don't have a chance against activist women with a strong sense of self and humor.

Smart and funny women and men around the globe are coming together and the people who started this have garnered even more attention to this cause than the shocking and violent video ever would ever have.

As for myself? A great excuse to go out and raise a glass of beer (or tea, or fruit juice) is better than the simple reason that I will probably still go out and have that beer.

I am going to send a pink chaddi in to the addy they give at the movement's Blog (Don't expect me to wear them. lol). I figure I will be at Victoria Secrets tomorrow to get something "valentinish" for my wife anyways... A few bucks on panties and postage will be well worth it to show real support for freedom and against senseless violence for people everywhere around the world.

A final note from the organizers of this movement:

PS. Our good friend L says we should not colour-discriminate. So if you really, really can't send pink chaddis, send those in other colours.
PPS. Both Women and Men are invited to send in their chaddi's/ pictures of chaddi's.

Give the women of the world a very special Valentines gift this year. Give them freedom by lending your voice, and maybe a pair of panties or a picture, to this cause.

[update] OMFG! This is just sick. A commission blames the women for getting beat up: