Via the far right wing Newsmax, it appears even the wingnuts are tiring of Sarah Winky Palin's never ending quest to become relevant: 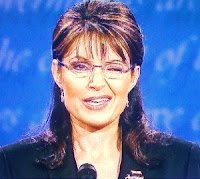 Palin is fueling the stories she condemns by talking about them instead of ignoring them, said Janis Edwards, an associate professor of communication studies at the University of Alabama and an expert on women candidates. One of Edwards' classes monitored Palin's role in a project called "The Palin Watch."

Palin "does seem to have ambitions, and this is one way of staying in the public eye," Edwards said.

"The media interest will wane. I think it already has," Burns said. "I have to wonder if this is something she's doing to keep her name out there."

When your own side is writing stories that are calling you out for your hypocritical attacks on the media you have jumped the shark. And though I must admit, Winky, we did thoroughly enjoy the comedic value you brought to the news cycle in your 15 minutes... Even down to your very last brain-emptying flatulated sputter of hollow charges: