Barack Obama is burning rubber in the Poll position leaving McCain far behind in his dust. Meanwhile, Nate Silver at the poll watching site FiveThirtyEight.com sums up the remaining weeks of the McCain campaign in a Bush terror threat like chart. 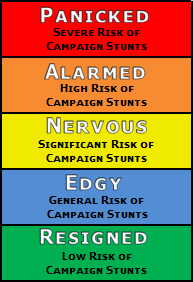 McCain is, again, asking his supporters to "Stand Up!" on the starting line with Bush and himself:

McCain is busy doing hard right turns on a track that only allows for left hand turns and wonders why he is getting lapped over and over again...

Some of the latest poll numbers that have caused the sputtering and flat responses from the GOP presidential candidate and all around Bush wannabe, John McCain, provided in a nice poll roundup by DemFromCT.
Brewed by Connecticut Man1 at 10/14/2008 10:20:00 AM

Jeez John, they're old people. Why are you telling them to get up all the time?

Poor guy has gone back to the convention speech (and what the media called his "rousing speech." How can they keep a straight face?).

The real problem for McCain is that he is even losing the elderly vote now when it comes to the indies that anybody needs to win the election. That means that every single one of the voting age groups is in the Obama camp.

His stump speech was old when he used it for Bush in '04. It is moldy and stale now.