Healy is, still, clearly "Fat, drunk and stupid" if he thinks anyone is buying the Republican snake oil he sells. CT Bob has an "Obama endorsing Himes" ad at the top of his Blog, but if you scroll down you find this tear on the perpetually drunk with stupidity statements of Chis Healy that have come to represent the idiotic thought process of Republicans everywhere:

Yeah, it's just noise when Chris Shays tries to hitch his wagon to the Obama juggernaut in his mealy-mouthed ads. If the senator's endorsement means so little, why does Shays use the phrase "The hopefulness of Barack Obama" in his ads? Healy continues:

"Barack Obama talking about Jim Himes, whom I doubt he's ever met, it won't draw flies."

Uh, Chris, I hate to break it to you, but if you pull your head out of your butt long enough to look at Jim's website or catch his ads on TV, you might see this: 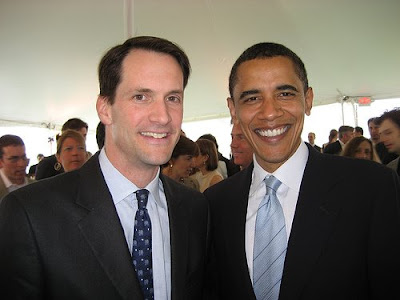 Oh well Chris, maybe you can photoshop your buddy Mr. Shays into the image where Jim Himes is standing right next to Barack Obama.

Unlike the spastic and erratic John McCain... Barack Obama actually takes the time to vet candidates BEFORE he endorses them. And, clearly, the Connecticut Republican party would do well to take away the keys from their 3 time DUI leader that has been integral in driving the local GOP into the ditch.

There is a huge difference between Jim Himes and Chris Shays, no matter how much the rubber stamp Republican, Shays, would like you to believe the opposite of reality:

There's no Republican in the House who has tried this exact same tactic more forcefully than Chris Shays of Connecticut. Shays is the last Republican member of the House from the 6-state New Hampshire region and his Connecticut congressional district has a PVI of D+5, the bluest district in America represented by a Republican.

Like his close ally, Joe Lieberman, Shays has managed to stay in office by persuading Democrats that he isn't really that Republican. His voting record, however, paints a very different picture. When Bush and the Republicans needed his vote-- no matter what the harebrained scheme they were pushing, he was always there for them. Take Iraq, for example. "Mr. Moderate" participated in 63 roll calls regarding Iraq since he voted 4 times on October 10, 2002 to authorize the use of force there. And "Mr. Moderate" voted against the Bush-Cheney agenda in Iraq exactly... 3 times, once to require competitive bidding on oil contracts when Cheney was caught trying to steal all of Iraq's oil, as did more than 4 dozen other Republicans, once to turn an Iraqi reconstruction grant into a loan (which was supported by 84 Republicans), and once on an inconsequential and unsubstantive budgetary matter. This week Shays, who is co-chairman of McCain's pointless Connecticut operation (he is polling just 36% against Obama) released an ad, very much like Gordon Smith's, trying to capitalize on Obama's immense popularity in Connecticut. Take a look-- and then consider donating to Blue America endorsee Jim Himes' campaign to replace him.

"In this race, the good people of Connecticut should know that Barack Obama supports Jim Himes and believes Himes is the candidate who will bring the change American families need to Washington."

Not a desperate to hang onto his seat Republican like Chris Shays that is running from the McCain campaign that he has failingly chaired in the state of Connecticut. Both the national and the local Connecticut Republican party have proven, over and over again, that they are a top down driven failure. And none of them are willing to take responsibility for any of their own failures.

Republicans blame Obama for policies and ideas that are as American as apple pie. They blame those evil liberals and progressives for pointing out hypocritical Republican voting records. They blame their own ownership society that is ruining middle class Americans. They blame the economy that they ran into the ground with their free market run amok deregulation. They blame failed foreign policies that they created and chose to support. They even try to blame Bush for implementing their own ideas. And, now, some of these Republicans blame the incompetent and erratic McCain campaign and, even more so, the entirely absurd choice of Palin... The candidates they chose as their standard bearers and have failingly led the charge for themselves.

Not one of these Republicans are honest enough to look in the miror and see the failure that was and always will be theirs to own.

And that is what they try to call change?

That is Republican politics per usual... Connecticut and the rest of this nation cannot afford to remain on the same course that Republicans have, yet again, chosen. Their divisive political games and outright lies on the campaign trail to nowhere have caused nearly as much harm to America as their disastrous policies have. America needs real change.

Just wanted drop by and say good luck for Tuesday. I will not feel better until Obama wins and the republicans get wiped out, as much as possible. I like Rob Miller, the Democratic challenger to the seat that one of Delay's ass kissers hold my congressman Joe Wilson. But given this place he ain't got much of a chance.

You might just be surprised at how this election goes. Even in the reddest of states there is a decent potential for change.